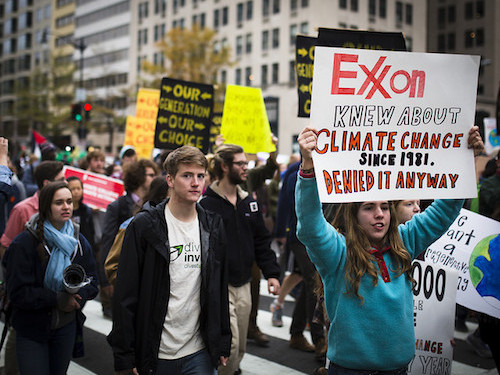 With Democrats poised to take control of the U.S. House of Representatives in the new year, 350.org has launched a petition urging the newly-empowered legislators to investigate ExxonMobil, the country’s biggest fossil company, “for misleading the public and wrecking the climate.”

“Democrats have not always shown the backbone to stand up to Big Oil,” said 350.org co-founder Jamie Henn. “We hope that changes.”

The Washington Post traces the attention Exxon has drawn from investigative journalists and state prosecutors since 2015, when InsideClimate News revealed that company executives had understood the risks of climate change since the 1970s, but chose to fund elaborate climate denial campaigns rather than contributing to solutions. “Last month, New York’s inquiry came to a head when the state sued Exxon for allegedly misleading investors about the risk that climate-related regulations posed to its bottom line,” the Post notes.

Henn suggested the U.S. House Science Committee, chaired since 2013 by climate-denying Republican Lamar Smith, would be an “appropriate” place to start an inquiry into Exxon’s activities. A spokesperson for Rep. Eddie Bernice Johnson (D-TX), who’s in line to take the chair of the committee in January, declined comment.

Beyond Congress, “a new slate of Democratic attorneys general elected last week, some of whom are taking over from Republican incumbents, could also potentially use their new offices to look into the climate work of Exxon and other oil companies,” the Post states. While some Democratic prosecutors have hesitated to join New York’s lawsuit, “environmentalists may see an opportunity now that state attorney general offices in Michigan, Nevada, and Wisconsin will be led by Democrats next year. The outgoing top prosecutors in those three states, each Republican, had either publicly or privately supported Exxon in its bid to squash New York’s investigation.”