50,000 March in Montreal to Demand Provincial Action on Climate 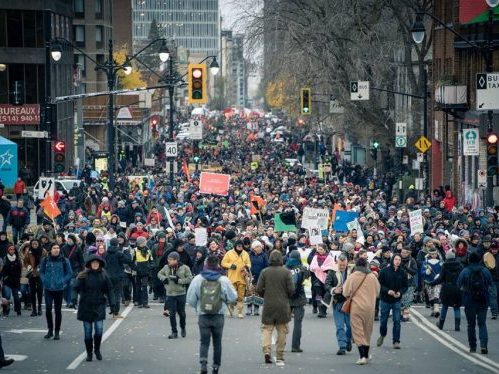 An estimated 50,000 people braved cold weather in Montreal Saturday to demand climate action by the new Quebec government of Premier François Legault, in what CBC describes as “part of a wider campaign with sister marches happening in cities throughout Quebec.”

The rally was the fifth in a series—with each one bigger than the last—that began with frustration at the limited attention environmental issues received during the recent provincial election.

“It started because we needed to channel the indignation we felt about the fact that, during the campaign, there was very little said about environmental issues—where we feel a true sense of urgency,” said Nathalie Roy, spokesperson for The Planet Goes to Parliament, the group behind the march.

“François Legault said to us a couple of weeks ago that he had heard us, and he was going to make the environment a top priority,” she added. “Well, we want to see that his actions match his words, and we’re not going to give up until they do.”

The province’s new environment minister, MarieChantal Chassé, was on hand for the rally, pledging “that the new government has heard the people. and concrete measures are coming,” CBC reports.

“On [Election Day] October 1, we took notice, and today, we walk the talk,” Chassé said. “We’re ready to put in the effort.”

CBC says The Planet Goes to Parliament is planning rallies in Montreal and Quebec City while COP 24 is under way in Katowice, Poland next month.

In related news, Hydro-Québec Chair Michael Penner and Vice-Chair Michelle Cormier resigned last week to protest the Legault government’s decision to cancel the Apuiat wind farm on the province’s north shore. The previous Liberal government supported the project, which was to be built in partnership with Innu communities, but Hydro President and CEO Éric Martel opposed it. The two senior directors attributed their resignations to “broken trust” with the utility’s senior leadership.