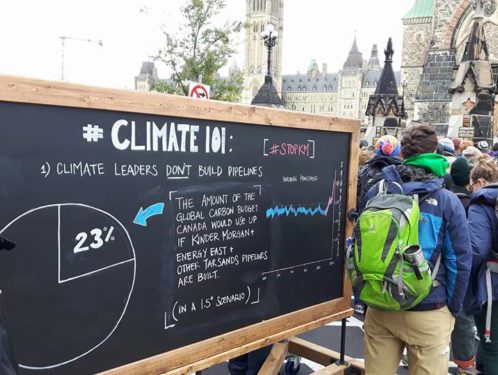 A new form of climate denial is taking root in Canada, in which politicians and media pundits acknowledge the climate crisis but offer no solutions or alternatives, Clean Energy Canada’s Merran Smith and Dan Woynillowicz argue in an op ed for the Globe and Mail.

“While once rampant, denying human-caused climate change is now considered out-of-touch and has been abandoned by most Canadian political leaders. As a recent poll from Abacus Data found, 90% of Canadians are concerned about climate change,” they write.

“But a new form of denial has risen from the ashes of the old: denying the solutions that empower us to minimize climate change.” That “solutions denial” takes multiple forms, they write: It ranges from second-guessing the straightforward economic reality that pricing carbon pollution and rebating the money back to Canadians will create an incentive to produce less pollution, to the false claim that Canada’s greenhouse gas emissions are too small to matter—even though 180 countries have carbon footprints smaller than ours.

“We also hear that China is the real problem, not us,” Smith and Woynillowicz write. “In reality, China—which emits far less pollution per person than Canada—has emerged as a global leader in renewable energy and electric cars, outpacing the rest of the world in investment and deployment.” Its electricity and transportation policies now equate to a carbon price of $50 per tonne, compared to Canada’s floor price of $20, and “earlier this year China put a price on pollution by launching the world’s largest cap-and-trade system.”

With the clock ticking toward the IPCC’s 2030 deadline for actions sufficient to limit average global warming to 1.5°C, “enough is enough,” they conclude. “We didn’t have time for climate denial, and we have even less time for solutions denial.”