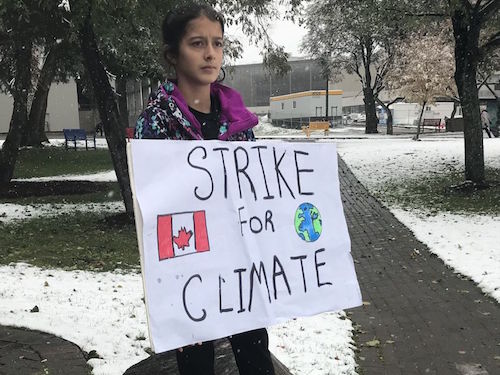 An elementary school student in Sudbury, Ontario has declared a school strike on the first Friday of every month to protest government inaction on climate change.

Sophia Mathur is skipping classes once a month in support of Greta Thunberg, a 15-year-old in Sweden whose school strike has earned headlines around the world.

“Climate change is going to affect my future, and maybe my children’s future,” Mathur said. “If we don’t act on climate change, we’re not going to have a future.” So “if adults don’t care about our future why should I?” she added. “What is the point of going to school?”

“Today we use 100 million barrels of oil every day. There are no politics to change that,” Thunberg told a massive rally in Helsinki in mid-October. “There are no rules to keep that oil in the ground, so we can’t save the world by playing by the rules because the rules have to change. Everything needs to change and it has to start today.”

The strike has since spread to Australia, as well.

At age 11, Mathur has been around the climate issue for a few years: she attended the world’s largest climate march to that point in New York City in September 2014, and has participated in Citizens’ Climate Lobby programs on Parliament Hill in Ottawa and Capitol Hill in Washington along with her mother, CCL International Outreach Manager Cathy Orlando.

In the summer of 2017, she attended a screening of Al Gore’s An Inconvenient Sequel, met the former U.S. vice president in person, and “made a pinky-promise to get adults to protect the climate with Canada’s Minister of Environment and Climate Change, Catherine McKenna,” the Sudbury Star reports. That led to Mathur persuading three local restaurants to stop automatically giving out straws with their drinks.

Then in August, she heard about Thornburg’s decision to protest, following the hottest summer since Sweden began keeping weather records 262 years ago. In mid-October, she attended the emergency Commons debate that followed the release of the Intergovernmental Panel on Climate Change report on 1.5°C pathways, concluding that “the MPs need to cooperate more”.

When they got home from that debate, Mathur and Orlando looked into Thunberg’s protest, realized she was only taking one day per month out of school, and decided to take up the #FridaysforFuture challenge, in which Thunberg is asking people to rally outside their parliaments or local government buildings in a strike for climate action. Mathur’s protest takes place the first Friday of every month, from 9:00 AM to 3:00 PM, in Memorial Park outside Sudbury’s city hall. Her next strike date is December 7.

“I feel very confident that we can do this, because a lot of people seem to believe this is real,” she told the Star. “A lot of people have been very positive about it, thanking me and saying they’re going to spread the news; they’re just being very nice.”