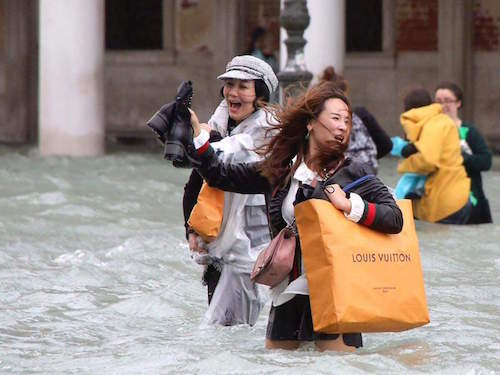 About 70% of Venice was flooded earlier this week by the highest tides in at least a decade, with a regional weather system driving waters above 1.6 metres (63 inches) that even swamped the elevated sidewalks the city installed to accommodate rising waters.

The tide was the highest recorded in the city since 2008, and possibly since 1979, EcoWatch reports, citing CNN. The New York Times has video of the flooding.

Elsewhere in northern Italy, six people died and the iconic Colosseum and Roman Forum were closed to tourists earlier this week after a low-pressure system brought flooding, winds, and rain across much of the region.

In Venice, “the high water didn’t stop tourists from wading around famous landmarks like Piazza San Marco as business owners worked to keep water from entering their shops,” EcoWatch states. “Videos posted to social media showed waiters serving pizza in rubber boots, waves crashing against historic buildings, and a jellyfish swimming up a cobblestone street.” And “runners in the Venice Marathon competed Sunday despite ‘the worst conditions ever for the event’.”

One recent study identified Venice as the Mediterranean World Heritage Site at greatest risk of flooding due to sea level rise.

Venice typically sees tides of 110 centimetres (nearly four feet) four times a year, and has been working since 2003 on a series of flood gates called Project Moses. “The project features retractable gates that would block the entrance to the city’s lagoon when tides are high,” EcoWatch notes, citing The Huffington Post. “But corruption scandals and high costs have beset the operation, which should be completed in 2022 and has already cost around US$6.5 billion.”

There’s just one problem: Last year, YaleEnvironment360 warned that the barrier will only be designed to hold off 30 centimetres of sea level rise, when scientists see Venice contending with 60 centimetres by 2050.

“After that, the sea will come in from other places to the north and the south,” said Project Moses spokesperson Monica Ambrosini. “There is nothing we can do to stop it.”