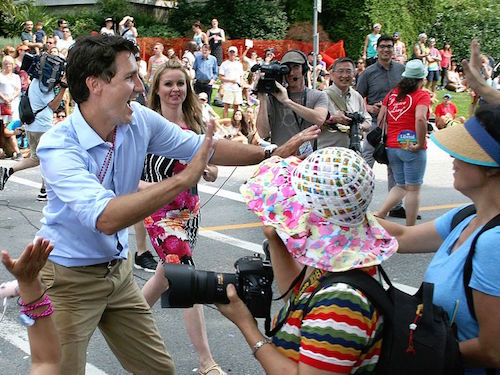 One of the Justin Trudeau government’s harshest climate critics says the PM may have hit “political gold” with his announcement last week that households will receive carbon tax rebates in the four provinces—including battleground Ontario—that have not seen fit to put their own prices on carbon.

In the past, Below2°C publisher Rolly Montpellier hasn’t hesitated to criticize Trudeau and has cabinet for slow-walking key elements of their pan-Canadian climate strategy, or for making every Canadian taxpayer the involuntary owner of a C$9.3-billion tar sands/oil sands pipeline. But this week, Montpellier is sounding downright enchanted with both the substance and the politics of Trudeau’s latest move.

“Prime Minister Trudeau’s announcement of a federal tax on carbon at Humber College, located in [Ontario] Premier Doug Ford’s Toronto riding, may prove to be political gold for his government just one year before the next election,” Montpellier writes. “Calling it a ‘tax on pollution’, he skillfully and deliberately took the climate change battle to Doug Ford’s back yard.”

The announcement followed Ford’s decision to kill a provincial cap-and-trade program that had already generated nearly $2.8 billion for off-carbon programs, and “was clearly meant to be an ‘in your face’ Doug Ford moment,” he adds. That tableau had Trudeau “capitalizing on a rare opportunity in politics to score a motherlode of political capital,” with a plan that will leave 80% of Ontario households with a federal rebate that exceeds the carbon tax they pay.

“Arguably, Ford’s scrapping of cap-and-trade opened the door to the introduction of the federal tax on pollution and climate action rebate,” Montpellier continues. “With Ontario likely to be the battleground between the Conservatives and the Liberals during the October 2019 election, Ford’s political blunder could not have come at a better time for the federal Liberals,” with the first rebates likely to hit Canadians’ mailboxes next April, about six months before the federal election.

“Our government is ensuring a price across Canada on what we don’t want, pollution, so we can get what we do want—lower emissions, cleaner air, opportunities for businesses with clean solutions, and more money in the pockets of Canadians,” said Environment and Climate Minister Catherine McKenna.

The Globe and Mail editorial board picked up on the political practicalities behind that statement. “It’s politically smart to hand carbon revenues directly to people, rather than to intransigent provincial governments,” the editors noted. “Doing so helps counter the federal Conservative talking point that the carbon tax is a revenue grab.”

If Trudeau really wants political points, he should reward carbon reducing behaviour by including, with the annual carbon rebate, a carbon info package and tips on how much MORE people and businesses can save by reducing or switching away from purchases of items that use a lot of carbon – e.g. electrification, local, energy efficient, food choice, small, public transit, minimum waste, etc plus further reward incentives for those who participate in priority programmes.

Trudeau and his corporate backers play the “progressive” media like a piano. Carbon taxes (especially given that many large corporate emitters are exempt) will essentially be minimal-change window dressing for the national effort to cut greenhouse gas emissions. Meanwhile, the tar sands pipeline Trudeau plans to build will continue to spew the world’s most carbon-laden emissions for decades to come. Far from financing a green future, such pipelines do and will suck tax dollars away from green energy alternatives and condemn our children and theirs to climate hell. Since Paris, Trudeau has charmed willing dupes with nonsensical policy contradictions that always play out to the advantage of corporate polluters.