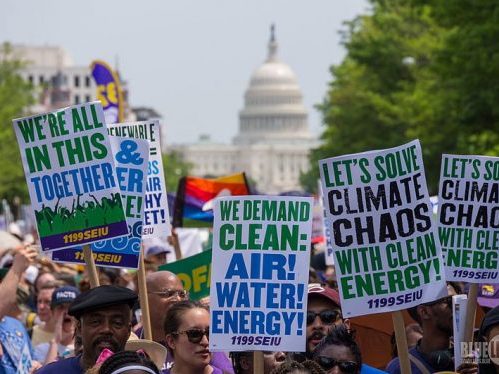 With U.S. midterm elections just five days away, Congressional Democrats are hoping the Trump administration’s relentless rollback of environmental regulations will become a focal point for voters—and quietly planning to target those policies if they gain a majority in the House of Representatives.

“Because they are less likely to capture the Senate, Democrats would have limited opportunities to enact laws,” Bloomberg Politics reports. “But they can assert themselves in the House—and complicate Donald Trump’s deregulatory efforts—by using time-honoured strategies of burying agencies in oversight requests and hauling federal officials to Capitol Hill for grillings.”

“I want to change the narrative of this whole thing,” said Raul Grijalva (D-AZ), ranking Democrat on the House Natural Resources Committee. “Where the Resources Committee isn’t just a passive part of the Trump administration, that they’re independent and that they have responsibility as co-equals for oversight and accountability.”

To get to that point, the Democrats will need a net gain of about two dozen seats in the 438-member House. And while environment and climate won’t be the top vote-determining issue for most of the people going to the polls, “environmental groups and Democrats are hoping the recent string of natural disasters and the Trump administration’s efforts to rollback dozens of environmental laws will be key in November’s midterms,” National Public Radio states. “Particularly in disaster-struck states like California and Florida, where a number of House seats are closely contested.”

“People are seeing first-hand the devastating impacts that climate change is having,” said Tiernan Sittenfeld, senior vice president for government affairs at the League of Conservation Voters, which is pouring US$60 million into the midterm campaign.

“And they’re going to be far more likely to support elected officials and candidates who are going to stand up for them, and not with the corporate polluters the way that Donald Trump and the Republican leadership in Congress does over and over again.”

NPR notes that Democrats are making frequent use of the word “oversight”, since a shift in House leadership won’t change Trump’s ability to kill off climate policies and other environmental protections via executive order. “But while Democrats could not force Interior Secretary Ryan Zinke to restore Bears Ears National Monument, for example, or to crack down on methane emissions from natural gas operations, Grijalva says they could force Zinke to explain himself,” the publicly-funded broadcaster notes. “So expect hearings. Lots of them. And Trump backers agree they would have an impact.”

“They would be able to tie up [agencies] mercilessly, so that they would kind of be able to slow walk a lot of the good work that’s being done on these issues,” says Thomas Pyle, president of the American Energy Alliance, a key backer of Trump’s environmental agenda. [Surely he’s not thinking of the way Congressional Republicans behaved through the eight years of the Obama administration? Nah, that’s just crazy talk.—Ed.]

The campaign also has U.S. environmental groups shifting their tactics and messaging to connect with voters who don’t usually base their ballot box decisions on climate. “To counter that dynamic, the political arms of groups including the League of Conservation Voters (LCV), the Sierra Club, and the Environmental Defense Fund are spending millions this fall to link climate change to the economy, corporatism and health care—the number one issue Democrats are running on this year,” The Hill reports.

Alongside the LCV’s campaign investment, the U.S. Sierra Club is planning to spend $6 million, far more than it has in the past. “I think very few voters vote on any single issue. They look at candidates and they compare their choices with their own values,” said Executive Director Michael Brune. “We don’t treat climate change as an outlier or special issue or something that is separate from the important things in people’s lives.”

Will Jordan, a senior research associate at the Global Strategy Group, said the recent run of major extreme weather disasters has made climate change a bigger campaign issue than it’s been in the past. “I think that, at the end of the day, it’s going to be fundamentally an election about the major issues: health care, Donald Trump, accountability themes of the election, but at the same time you see this [climate] argument get threaded into those,” he told The Hill.