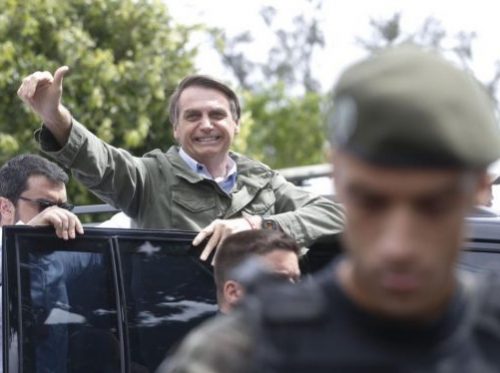 This story was updated October 30 at 10:40 AM to reflect Canadian reaction to the election result in Brazil…In an extraordinary statement on Jair Bolsonaro’s presidential election win yesterday, the Brazil Climate Observatory is vowing to help pull the far-right, seven-term member of congress away from the extreme positions he espoused during the campaign.

The Climate Observatory’s Twitter profile photo has been replaced by one word—RESISTA. In a release, the organization pledges to fight for stronger environmental governance, protected areas policies that extend conservation and settle Indigenous claims, and adherence to Brazil’s commitments under the Paris Agreement, including the drive for increased climate ambition.

But it won’t be an easy road. “Critics at home and abroad have lambasted the former paratrooper for his homophobic, racist, and misogynist statements and his support for Brazil’s military dictatorship that ruled from 1964 to 1985,” CBC reports, in a story that earned furious pushback for its “amoral” framing of Brazil’s upcoming hardship as a “fresh opportunity” for Canadian mining companies and other interests. In what CBC called a “terse” statement acknowledging the election result, Canadian Foreign Affairs Minister Chrystia Freeland congratulated Brazilians for exercising their democratic right to vote, but withheld any praise of the incoming regime.

“The civilizational setback that Bolsonaro and his closest allies advertised over and over again before and during the presidential race must not become official policy in Brazil,” the Observatory writes. “The president must be the tireless guardian of human rights and democratic institutions. He must govern for all Brazilians, not some. We will not, on any accounts, normalize the erosion of democratic values, of our citizenship, and of the rights of the present and the coming generations. Wherever threats may be, we shall be the resistance.”

The Observatory also stresses its commitment to seeing Brazil increase its climate ambition, in line with the drive for a 1.5°C limit on average global warming. “To backtrack on the climate deal and on adaptation measures would be disastrous for the country—from the geopolitical, commercial, and developmental standpoints, but above all for the security of Brazilians, something the president-elect has vowed to prioritize,” the organization states.

The statement points to the “toxic atmosphere” created by the presidential campaign, and the 57 environmental defenders who were killed in Brazil over the last year—many of them rural, Indigenous, and maroon (quilombola) leaders. “We will resist any and all attacks on traditional peoples and communities, whose rights are safeguarded by the Brazilian Constitution, as well as any violence committed against activists,” the Observatory vows.

2 Comments To "‘We Shall Be the Resistance’, Brazil Climate Hawks Declare, as Bolsonaro Sweeps to Power"

When the ‘West’ stops demanding huge quantities of cheap soya, then the pressure on Brazil’s environment will reduce.

YES, interesting. Are there resources easily available that would tell people in soya-consuming countries what most of that product is used for? I’m assuming beef production, but it isn’t an area I know well.