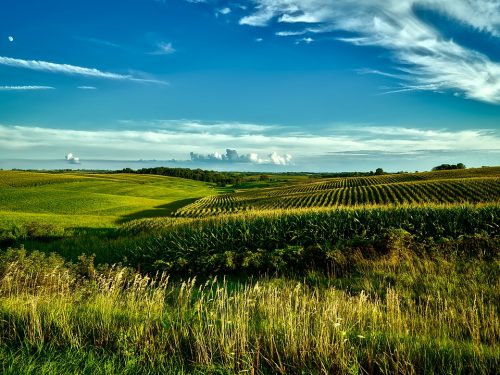 While their politicians refuse to talk about climate change, farmers in Iowa are getting nervous about the climate impacts they’re seeing in their fields, as the conversation around “any cooperative elevator’s coffee table” turns to the weather, along with commodity markets and the impact of Donald Trump’s trade war with China.

“It’s the least debated issue of the midterm political season,” writes Art Cullen, editor of the Storm Lake Times in Buena Vista County, Iowa, in a post for The Guardian. But “everyone knows it has been getting wetter and weirder,” and “everyone knows that things have been changing in sweeping ways out here on the richest corn ground in the world.”

He adds that “it’s drought in the spring and floods in the fall—what were considered 500-year floods in Cedar Rapids and Des Moines 30 years ago are now considered 100-year floods. Iowa has been getting soggier in spring and fall, with scary dry spells interspersed, and more humid at night by as much as a third since 1980.”

When Dr. Gene Takle, an IPCC climate scientist based at Iowa State University, first began predicting today’s floods, “farmers just saw ponding and called the tiling company to install more,” Cullen recalls. Now, “we’re on our way to doubling the size of the northern Iowa drainage system in the past 30 years, as the upper Midwest has grown more humid and extreme.”

And now, that increase in drainage “is delivering runoff rich in farm fertilizer to the Mississippi River complex and the Gulf of Mexico, where the nitrate from Iowa and Illinois corn fields is growing a dead zone the size of New Jersey. The shrimping industry is being deprived of oxygen so Iowa farmers can chase 200 bushels of corn per acre—and hope against hope that corn will somehow increase in price as we plow up every last acre.”

The increased flow is also translating into US$100 million in infrastructure improvements that Des Moines Water Works will have to undertake to remove farm chemicals from the local water supply.

“Meanwhile, those huge rainfalls on exposed black dirt wash it to the vales, even from the flat ground of our neighbourhood,” Cullen writes. “We are losing soil at two to three tons an acre a year. Nature can regenerate the soil at only a half-ton a year. So we are washing our black gold down the river four to six times faster than we can regrow it.” With less soil, corn and soy crops are delivering less protein, corn is coming up starchier, and overall corn yields are bound to decline.

The problems extend from Iowa to Minnesota to Kansas, and yet “it’s not a part of the political conversation per se,” he continues. “Nobody is talking about climate change in their campaigns, or the implications for food production near-term, or how water will be handled in fast-changing conditions. It is one of those electric rails, because so much money is wrapped up in the corn-ethanol-meat-soya bean complex as it stands.”

So farmers take action on their own, looking to cover crops like rye to protect the soil and hold nutrients in place.

“Few politicians in the five states around here are talking about regulating agriculture in an era of warmer and wetter nights and long droughts. Yet farmers are paying attention,” he writes, looking closely at profitability reports from state sustainable agriculture groups. Practical Farmers of Iowa, for example, advocates “a rotating crop-livestock land use with more diverse plantings that can restore soil and make farmers more resilient—and get them off that expensive chemical jones. Because the government doesn’t appear equipped to deal with it.”

That’s especially true, he adds, when the agriculture supply chain is controlled by the Koch brothers, Bayer-Monsanto, and Dow-Dupont, which also “happen to control the political infrastructure in the Corn Belt.”