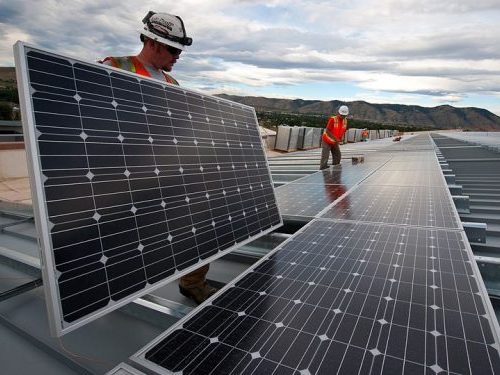 The fight against climate change is only lost if people think it is, renowned writer Rebecca Solnit insists, in a recent opinion piece aimed at quelling the despair that too many people took away from the recent IPCC report on 1.5°C pathways.

“The future hasn’t already been decided,” Solnit declares, after recounting the sense of doom that showed up online in the wake of the report. “Climate change is an inescapable present and future reality, but the point of the IPCC report is that there is still a chance to seize the best-case scenario rather than surrender to the worst.”

And that, she says, is very similar to what past generations of global campaigners have had to contend with, summed up in this quote from Soviet dissident Natan Sharansky, remembering the words of his mentor Andrei Sakharov.

“They want us to believe there’s no chance of success,” Sakharov said. “But whether or not there’s hope for change is not the question. If you want to be a free person, you don’t stand up for human rights because it will work, but because it is right. We must continue living as decent people.”

Solnit adds that, “right now, living as decent people means every one of us with resources taking serious climate action, or stepping up what we’re already doing.”

That perspective is essential because climate change is an issue of human rights and intergenerational equity, but also because “taking action is the best way to live in conditions of crisis and violation, for your spirit and your conscience as well as for society,” she writes. “It’s entirely compatible with grief and horror; you can work to elect climate heroes while being sad.”

Climate action is also the only option for confronting the crisis, even though “there are no guarantees,” she adds. “But just as Sakharov and Sharansky probably didn’t imagine that the Soviet Union would dissolve itself in the early 1990s, so we can anticipate that we don’t exactly know what will happen and how our actions will help shape the future.”

From the abolition of slavery in the United States to the dawn of human rights in the former Soviet bloc, “the histories of change that have made me hopeful are often about small groups that seem at the outset unrealistic in their ambition,” Solnit writes. And she cites two changes in the last little while that are bigger, and point toward hope on climate change and climate solutions.

The global movement to draw down greenhouse gas emissions and address the impacts of climate change “was small, fragmented, mild a dozen years ago, and the climate recommendations then were mostly polite, with too much change-your-lightbulbs focus on personal virtue,” she recalls. Now, “the movement that has taken on pipelines and fuel trains, refineries and shipping terminals, fracking and mountaintop removal, divestment and finance, policy and law, and sometimes won is evidence of what can happen in 12 years. Some of what were regarded as climate activists’ wild ideas and unreasonable demands are now policy and conventional common sense.”

The other “encouraging and even a little awe-inspiring” source of hope is the lightning-fast rise of renewable energy, energy efficiency, and battery storage technologies.

“At the beginning of the 21st century, renewables were expensive, inefficient, infant technologies incapable of meeting our energy needs,” she writes. “In a revolution at least as profound as the industrial revolution, wind and solar engineering and manufacturing have changed everything; we now have the technological capacity to largely leave fossil fuel behind. It was not possible then; it is now. That is stunning. And encouraging.”

Citing the IPCC report, Solnit stresses that the “major obstacles to [the transition] are political, the fossil fuel and energy corporations and the governments obscenely intertwined with them.” While too many countries, including Canada, focus most or all of their effort on curtailing energy demand rather than driving down fossil energy supply, she points to Belize, Ireland, New Zealand, France, and Costa Rica as the first five to consider bans on new fossil exploration and extraction.

“We have to be real about this: this is the oil industry, and wars are fought over it,” Oil Change International Director Steve Kretzmann told Solnit. “There’s a lot of political power there, and there are a lot of people defending that power.”

But at the same time, “the moment it’s clear it’s inexorably on the wane, it will pop,” he said, and Solnit notes that people around the world have worked to “hasten the popping” by cutting fossil subsidies, and building a “once-mocked”, now US$6-trillion fossil divestment movement.

“The fading away of the malevolent power of the oil companies would be a profound transformation, politically as well as ecologically,” she concludes. “I don’t know exactly if or how we’ll get to where we need to go, but I know that we must set out better options with all the passion, power, and intelligence we have. A revolution is what we need, and we can begin by imagining and demanding it and doing what we can to try to realize it. Rather than waiting to see what happens, we can be what happens.”