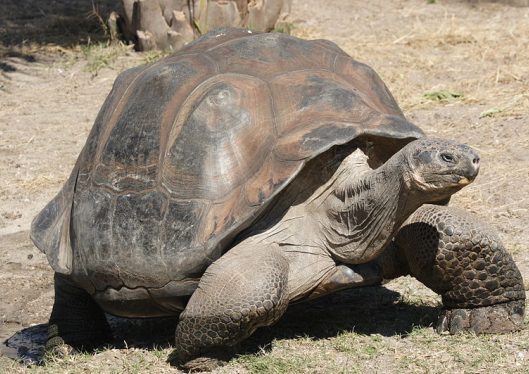 Conservation scientists are taking a serious look at “rewilding” key ecosystems by reintroducing large species like lions and elephants, giant tortoises and donkeys, in areas where they once thrived. One of the 16 papers in a recent special series suggests the process could help reduce greenhouse gas emissions.

“Large herbivores were once a common sight in all of Earth’s habitable continents,” Carbon Brief explains, citing the research papers recently published in the journal Philosophical Transactions of the Royal Society B. “However, hundreds of years of intensive livestock farming have contributed to steep declines in native herbivores and large increases in cattle.”

That shift has caused a steep increase in methane emissions—since the world’s 1.5 billion cows emit more of the climate-busting gas than native herbivores. “The largest emissions, per individual animal, come from large ruminants, such as cattle, and similar wild species, such as African buffalo or American bison,” said lead author Prof. Joris Cromsigt, a megafauna researcher at the Swedish University of Agricultural Sciences. “The least methane is, in principle, produced by the large non-ruminants, such as rhino, elephant, and equid [horse] species.”

That’s because “many large herbivores, including rhinos, elephants, and camels, are ‘hindgut fermenters’—meaning that they have a simple stomach and carry out fermentation of food in the large intestine,” Carbon Brief explains. Only rarely has anyone compared the species’ methane footprints. But a 2017 study calculated that, in Africa, the replacement of wildlife with cattle over the last 1,000 years led emissions to more than double, from 3.4 to 8.9 million tonnes per year.

Cromsigt said reintroducing large herbivores could also be a boon for forest carbon storage. “This is because large herbivores act as long distance seed dispersers for large fruit trees,” Carbon Brief notes. In fact, research suggests that many large tree species in South America (such as the jicaro tree) may have evolved giant fruit in order to entice now-extinct large herbivores, such as the giant ground sloth.”

Without the animals, “numbers of the tallest and woodiest trees—which also store the most carbon—have declined,” notes science writer Daisy Dunne. “Research shows that the loss of living herbivores, such as American tapirs and African and Asian forest elephants, could cause the world’s tropical forests to lose between 2% and 12% of their stored carbon.”