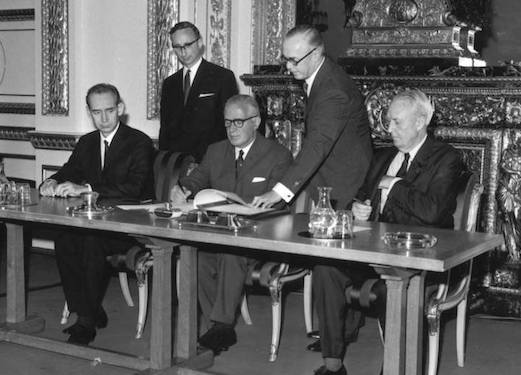 With climate breakdown an “imminent threat” to humanity, an opinion piece this week in The Guardian is calling for an international fossil fuel non-proliferation treaty to avert calamity.

“A new line in the sand is needed to underpin the existing [Paris] climate agreement, to exert influence over the immediate choices of policy-makers,” write author and campaigner Andrew Simms and Peter Newell of the Centre for Global Political Economy at the University of Sussex. Their post points to the disconnect between the urgency of the IPCC’s recent report on 1.5°C pathways and the response from major governments and fossils.

“At the very least,” they write, “the science should mandate a moratorium in rich countries on any further expansion of the fossil fuel industry, or any infrastructure dependent on it.”

“The first step in the nuclear treaty process was a stock take of who had what weapons,” Simms and Newell write. “Why not cut to the chase and agree to assess those fossil fuel reserves which, if burned, would carry us across the 1.5C° warming line, and monitor their non-use and any measures likely to lead to the proliferation of fossil fuels?” Or, in the words of Carbon Tracker’s Mark Campanale: “What we need is a global, public register setting out who controls the reserves from where the CO2 is coming.”

Adapting the NPT’s disarmament pillar would mean rapidly substituting clean energy for fossil fuels, the two authors continue. “We know this can be done in ways which would also save tens of millions of lives by improving air quality,” they note. “But ‘disarmament’ would also be delivered by following the climate scientists’ three-point plan for action carrying the ‘highest benefits’: lowering energy demand, lowering material consumption, and switching to food choices that are low-carbon (in other words more plant-based food).”

In a climate context, promoting “peaceful” uses of technology “would mean massively expanding existing initiatives to compensate poorer countries for leaving fossil fuels in the ground, while ensuring access to clean energy and the technology needed for development,” they add. “Funds could also be redirected from the staggering $10 million per minute that governments give in fossil fuel subsidies.”

As far back as 1988, at a conference in Toronto, “climatic upheaval was described as a threat ‘second only to nuclear war’, a sentiment endorsed from the CIA to MI5 and the United Nations,” Simms and Newell conclude. “National efforts are crucial, but a new fossil fuel non-proliferation treaty supported by movements calling to leave fossil fuels in the ground would provide a transparent and fair means to stop climate breakdown.”

They add that “the best way to mark the 50th anniversary of the NPT would be to begin negotiation of its fossil fuel equivalent.” (h/t to The Energy Mix subscriber Bill Henderson for pointing us to this story)