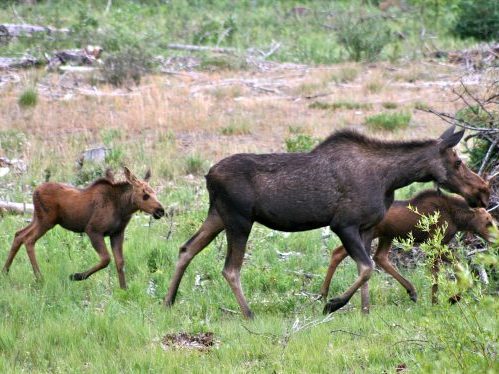 The average moose calf at two locations in New Hampshire and Maine between 2014 and 2016 had to contend with more than 47,000 ticks slowly sucking its blood, and a recent paper in the Canadian Journal of Zoology concludes that climate change was to blame.

A team led by Peter J. Pekins, a professor of natural resources and the environment at the University of New Hampshire, surveyed the moose populations across three consecutive years of tick outbreaks, knowing that climate change had delayed the arrival of winter snows that affect the life cycle of an insect that is literally a bloodsucking parasite. They concluded that the continuing series of outbreaks “arguably reflects a host-parasite relationship strongly influenced by climate change at the southern fringe of moose habitat.”

The extended warm season “gives the ticks a leg up as they glom onto the moose, their preferred hosts, in the fall. They then feed through winter and hop off in the spring to lay eggs,” the Toronto Star reports, in a story that originally appeared in the New York Times. While the big infestations “are not great for adult moose, they are especially bad for moose calves, which can die from the onslaught.”

The largest number of ticks the researchers found was about 100,000, on a calf that was already dead, likely of anemia. “It’s about as grody a picture as you can imagine on a dead animal,” Pekins told the Times. “Anything over 35,000 is trouble for a calf moose,” he added, noting that 125 calves—70% of the study population—died while the tracking was under way.

While Maine and New Hampshire had fewer than 50 moose in the 1970s, “their numbers have multiplied many times over since then, thanks to improvements in the available habitat and a lack of predators like wolves,” the Times explains. “As a result, Maine now has anywhere from 60,000 to 70,000 moose; New Hampshire had as many as 8,000 or 9,000 in the early 2000s, though the numbers now hover around 5,000. And it is the abundance of moose that enables the ticks to survive.”

But the host and parasite were “more or less in balance until the changing climate tilted the scales in the ticks’ favour. Over the long term, Pekins does not expect the moose to die off completely, but there will be fewer of them.”