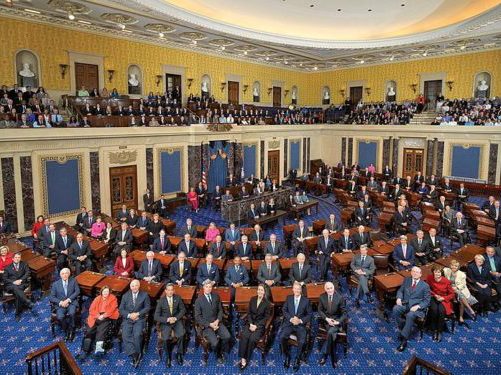 With just 14 days to go before crucial U.S. midterm elections, some Congressional Democrats are under fire for only promising “incremental steps” to address climate change if they retake control of the U.S. House of Representatives in January.

When they controlled both chambers in 2009, Democrats in the House “passed cap-and-trade legislation, which subsequently died in the Democratic-controlled Senate,” The Hill recalls. But with Donald Trump in the White House and Republicans expected to retain their Senate majority, Democrats believe that “climate legislation would face stiff headwinds, and pushing it could spark backlash from the right—both now and after the November 6 midterm elections.”

With that political calculus in mind, Rep. Gerry Connolly (D-VA) said the party should “focus on the practical and the opportunistic”, to make short-term progress while fighting for “the aspirational goals” over the longer term.

“It’s going to be, I think, more of an opportunistic strategy, where, in various pieces of legislation, across the board, we’re going to insert measures that address climate change,” said Connolly, a leader in the Sustainable Energy and Environment Coalition.

“I could imagine that we can do ancillary pieces that are very much reinforcing this issue and concern for climate change,” agreed Rep. Paul Tonko (D-NY), ranking member on the House Energy and Commerce Committee’s environment subcommittee.

Coming just days after the dire warning from the Intergovernmental Panel on Climate Change (IPCC) that time is running out on pathways to a 1.5°C future, those plans didn’t sit well with the Democrats’ potential supporters in the climate and energy community.

“ARE YOU KIDDING ME?” tweeted author and activist Naomi Klein, in response to the coverage in The Hill.

“Gradualism is fundamentally incompatible with protecting civilization and the natural world,” added Margaret Klein Salamon, founder and director of The Climate Mobilization. “It’s pathetic that the Democrats are continuing to pursue this approach.”

Julian NoiseCat of 350 Action cited the IPCC report as evidence that incremental action is not an option. “We have a little over a decade to shift our economy to clean energy. But that’s also an opportunity: an opportunity to put millions of Americans to work in good, green, union jobs supporting families and creating prosperous communities,” he said. “We are excited to work with ambitious progressives in Congress who understand the enormity of this moment and opportunity.”

And despite Connolly’s and Tonko’s caution, there was a wider range of voices in the Democratic caucus.

“I do think we need to go big,” said Rep. Don Beyer (D-VA). “I’m all for incrementalism in policy. We do lots and lots of it, and it’s a good way to move forward. But this situation is so serious that we can’t do it in little steps.”

Rep. Earl Blumenauer (D-OR) said fighting carbon pollution will be “a top priority” if Democrats win the House. “My preferred method has been putting a price on carbon—cap-and-trade is complex and less efficient,” he said. Rep. Ted Deutch (D-FL), a co-chair of the bipartisan, 90-member Climate Solutions Caucus, agreed that a price on carbon might not be beyond reach.

Beyer suggested “a path for working with moderate Republican senators and getting a climate change bill to the president’s desk,” The Hill reports, despite Trump’s noted penchant for climate denial. “If it gets that far, he thinks Trump—enticed by the opportunity to claim a victory—might change his tune.”

With early voting under way and the election itself just two weeks away, social media channels are alive with a flurry of related activity. NowThisPolitics was out with a Facebook video on why the youth vote could change the U.S. forever. In filmmaker Darren Aronofsky’s two-minute Twitter production, a group of youth from different backgrounds answered the question in the #WhyDoYouVote hashtag. And Nail Communications published a brilliant, one-minute YouTube video that (ostensibly) urged young Americans aged 18 to 34 not to vote. [View them all. Then circulate them as far and wide as you can—Ed.]

And with Trump set to approve construction of the Keystone XL pipeline, a “dream team” consisting of Bold Nebraska’s Jane Kleeb, 350.org co-founder Bill McKibben, and U.S. Sierra Club Executive Director Michael Brune was planning an October 28 voter outreach rally in Lincoln to help flip the composition of the state Public Service Commission, which has authority over the project.

“In addition to the candidate Christa herself, joining us to knock on doors and write post cards to voters will be Nebraska landowners who live on the proposed KXL pipeline route,” Bold writes, “and representatives from Tribal Nation allies.”

Off-Fossil Transition to Reach ‘Point of No Return’ in 2035, But Not Soon Enough for IPCC Target