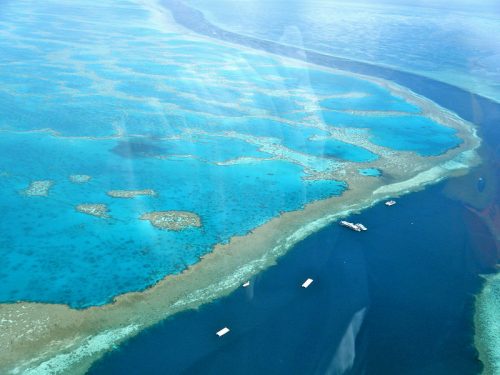 Australia has had to back down from a A$10-million public relations blitz for the Great Barrier Reef, after climate and oceans advocates scorched the country’s climate-denying Liberal coalition for failing to protect the iconic ecosystem from climate impacts.

“The campaign would have sought to give the public hope that the reef can be saved and outlined action being taken to protect it, after devastating back-to-back coral bleaching events brought on by climate change,” the Sydney Morning Herald reports. But word of the PR effort, contained in this year’s federal budget, led to “a public backlash over its failure to address climate change and protect the natural wonder.”

“It doesn’t matter how many millions you spend on trying to spin your reef-saving credentials,” said Richard Leck, head of oceans at WWF Australia. “Without an effective policy on climate change, the public simply won’t believe it, and the government has finally realized that.”

The government most recently led by Prime Minister Scott Morrison is also under fire over an unsolicited, $444-million grant to a fossil-affiliated foundation that claims its conservation efforts can “climate-proof” the reef.

The funds were to enable the Great Barrier Reef Foundation “to implement conservation programs including water quality improvements, and making the reef more resilient to climate change,” the Herald notes. But “the foundation did not ask for the funds, and expert government agencies were not given the opportunity to apply.” Morrison, who was then treasurer, “has taken responsibility for the decision, which is now being examined by a Senate inquiry.”

Earlier this month, GBRF Managing Director Anna Marsden said its efforts would “essentially ensure we can climate-proof our coral reefs”. But “internationally renowned reef expert Terry Hughes scoffed at the suggestion,” the Herald states, “telling Fairfax Media it was ‘not scientifically credible’.”

“Nothing in the $444-million allocation will do anything about reducing greenhouse gas emissions,” Hughes said. “The only way to deal with global warming is to tackle global warming. It isn’t possible to climate-proof the reef.”

The Foundation “is supported by corporations including those from the polluting fossil fuel industry,” the Herald notes. “It does not lobby for emissions reduction, despite recognizing that climate change is the biggest threat facing the reef.”

A GBRF spokesperson said global climate action “needs to be matched with local measures to respond to the damage already done and continue to build reef resilience and adaption,” adding that the government grant “will allow us to advance the scale of work being done and will be guided by science”.