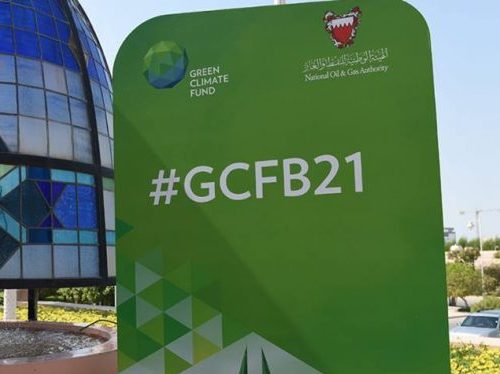 With the United Nations’ troubled Green Climate Fund holding a board meeting in Bahrain last week, the oil-rich desert kingdom stirred serious concerns with a request for US$9.8 million for water conservation work to be carried out by its National Oil and Gas Authority.

The request comes at a time when the severely underfunded GCF is already in disarray, after seeing Executive Director Howard Bamsey resign at the end of its last meeting in July.

The GCF is supposed to collect funds from developed countries—they’re currently far behind on a promise of $100 billion by 2020, with only about $10 billion pledged—to help developing countries reduce their greenhouse gas emissions and adapt to the impacts of climate change. Without those dollars, developing countries won’t have the resources or capacity to meet their commitments under the Paris Agreement.

Now, Bahrain is running into “heavy criticism” for what’s seen as a poorly-justified request for funds to support wastewater remediation for its oil and gas operations. “Experts are concerned that it will encourage other oil-rich nations to come forward with proposals that will benefit their fossil fuel industries under the guise of adapting to the impacts of climate change,” The Guardian reports.

“The notion of leveraging public money targeted at climate action to support fossil fuel companies is absurd and misguided at best,” said Climate Action Network Executive Director Wael Hamidan. “The only justifiable reason for assisting fossil fuel companies should be to transition fully into 100% renewables as a matter of urgency—and even that could be funded through these companies’ enormous profits.”

“Surely the oil companies should be cleaning up their own polluted water,” said Mohamed Adow, international climate lead at Christian Aid. “This funding would not only undermine trust in the GCF, it would also set a bad precedent for other proposals involving fossil fuel companies looking to leech off the fund’s resources.”

A GCF spokesperson told the Guardian that “this is one of 20 project proposals to be considered by the GCF board this week. The project will not finance any fossil fuel operations, but targets water shortage resulting from climate change.” The spokesperson said the proposal, put forward by UN Environment, would cover “water-saving devices and greywater recycling systems” for lower-income households, and for public buildings like mosques and schools.

“Bahrain’s application to the Green Climate Fund is about addressing the severe threat posed by global climate change to the kingdom’s freshwater supply,” added a spokesperson for the country’s environment council. “The impact of rising temperatures and increasing saline intrusion is expected to reduce Bahrain’s freshwater resources by between 50 to 100 million cubic metres of water per year in the short term, well above the global average and posing a unique risk to the kingdom’s water security.”

The spokesperson added that, “as a committed signatory to the Paris agreement, the kingdom has already taken significant steps to counteract the impact of climate change, including the development of a new national water strategy. We now seek assistance from the GCF to help support these critical interventions.”