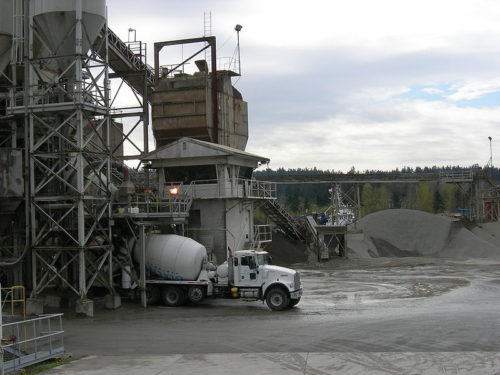 Local and national environmental groups are urging Environment and Climate Minister Catherine McKenna to review a massive proposed cement plant in L’Orignal, Ontario, about 90 kilometres east of Ottawa, that would release a megatonne per year of carbon dioxide plus 18 tonnes per day of toxic pollutants like nitrogen oxides, sulphur dioxides, and particulate matter.

Greenhouse gas emissions from the project proposed by Colacem Canada, a Canadian subsidiary of an Italian multinational, would make the 52-building facility one of Ontario’s top dozen or so carbon polluters, National Observer reports. And the plant is bound to transform the surrounding region, the United Counties of Prescott and Russell, since “cement manufacturing is a heavy industrial undertaking,” Observer adds. “The proposed plant would have one of the largest chimneys and emit some of the largest amounts of carbon pollution out of the 18 major cement plants in Canada.”

Yet the proposal has not been subject to federal or provincial review, and has the backing of some local officials. “A push to rezone the land from rural to heavy industrial use, a necessary step to allow the firm to apply for various provincial permits, has been making its way through hearings of the Local Planning Appeal Tribunal—which replaced the Ontario Municipal Board this spring—although these have been indefinitely stalled over a lack of bilingual staff,” the paper notes.

Colacem says the new facility will “utilize the most advanced production technology available to achieve efficient energy consumption and minimize impact on surrounding ecosystems.” But Nature Canada, Ontario Nature, Nature Québec, and the Vankleek Hill and District Nature Society are urging McKenna to designate the project for federal review. The Canadian Environmental Assessment Agency (CEAA) acknowledged the groups’ concerns in an October 5 letter, adding that it would “provide advice to the minister” on the project.

“We got a response very quickly back from the agency saying, ‘We’re looking at it,’” Stephen Hazell, director of conservation and general counsel for Nature Canada, told Observer’s Carl Mayer. “The question is, what are you doing—Ontario and Canada—to make sure that this company is minimizing its greenhouse gas emissions and its acid gas emissions?”

McKenna press secretary Caroline Thériault referred questions back to the CEAA, where spokesperson Alison Reilander said the agency is still “gathering information to support its recommendation to the minister as to whether to designate the project.”

Ontario Environment Minister Rod Phillips’ office had no comment for Observer at time of publication.

“Such a project would almost certainly have fallen under the former Wynne government’s cap and trade regime, which the Ford government is moving to cancel. That regime mandated that a facility participate in carbon pricing if it put more than 25,000 tonnes of emissions in the air each year,” Mayer writes. “It is unclear what Phillips will be doing now to discourage such pollution from large projects, although his government did announce consultations towards a new climate plan.”

In addition to its atmospheric impact, Observer says the new plant would bring an additional 110 heavy trucks to the L’Orignal area per day, according to an assessment by professional planner Mark Dorfman. It would draw water from nearby quarry pits and feature a 125-metre chimney.

“This plant is 70 kilometres upwind from Montreal, so any acid rain that comes from this plant, with prevailing westerly winds, it’s going to come right on top of it,” said Nature Canada’s Hazell. The organization is asking for a federal review to “get some authenticated numbers from the company as to what the emissions are going to be.”

On its website, Colacem says the new plant would feature “state-of-the-art technology” that includes a “hybrid air filter” for dust control. It has committed to “zero wastewater discharges.”

Just three weeks ago, Colacem announced a settlement worth C$1.3 million plus court costs to close out a class action lawsuit alleging “neighbourhood disturbances” in Grenville-sur-la-Rouge and Harrington, Quebec, on the north shore of the Ottawa River. “Colacem has denied and continues to deny any misconduct or liability of any kind in relation to the exercise of this class action,” the company stated in an October 3 release.

Energy Efficiency is Waning, But Could Quickly Drive Down Emissions, IEA Analysis Shows