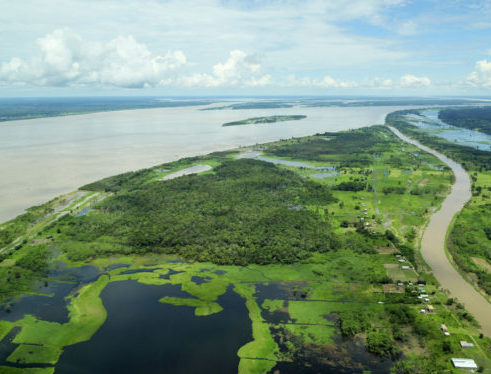 No more Paris Agreement. No more ministry of environment. A paved highway cutting through the Amazon.

Not only that. Indigenous territories opened to mining. Relaxed environmental law enforcement and licencing. International NGOs, such as Greenpeace and WWF, banned from the country. A strong alliance with the beef lobby.

In a nutshell, this is what Jair Bolsonaro, who is sailing towards Brazil’s presidency after taking a near-majority in a first-round vote earlier this month, has promised for the environment.

An enthusiast for torture and the 1964-85 military dictatorship, the retired army captain is famous for racist, homophobic, authoritarian, and misogynistic rhetoric. But his views on how to manage Earth’s largest tropical rainforest are just as grim and appalling.

Bolsonaro has galvanized voters in urban centres who are disillusioned with the political establishment’s corruption scandals and attracted to his “tough-on-crime” positions amid rising criminality rates. He received 46% of the vote on Sunday, October 7 and now faces a 28 October run-off with the Workers Party’s Fernando Haddad, who polled 29%.

In the Amazon, illegal loggers, miners, land-grabbers, as well as large landowners have rallied to his banner. Here, they don’t expect Bolsonaro to enforce the law. On the contrary, the hope is that he fulfills his promise to obliterate nearly all environment and pro-indigenous legislation. He won massive support in rural central western states and all but one Amazonian state.

In August, Bolsonaro raised eyebrows internationally when he pledged to join Donald Trump’s U.S. and withdraw Brazil from the Paris Agreement. That means the country would no longer be committed to curb its emissions from the deforestation of the Amazon, which is here a bigger source of greenhouse gas than the burning of fossil fuels.

Bolsonaro accepts the climate is changing dangerously. When CHN asked him about this during a press conference in April, he said the solution was in controlling the growth of the world’s human population.

“This explosive population growth leads to deforestation,” he said. “Because you will not grow soy on the terrace of your building or raise cattle in the yard. So we have to have a family planning policy. Then you begin to reduce the pressure on those issues that lead, yes, in my opinion, to global warming, which could be the end of the human species.”

Yet he praised Trump’s policy on the Paris deal and implied that it was part of a UN plot to strip Brazil’s sovereignty over the Amazon.

“Congratulations to Trump. If it were good for them, [the U.S.] wouldn’t have denounced it,” he said, adding that a concept for a “136-million-hectare ecological corridor” that would be “under world’s control, not ours” had “been discussed”. “I don’t know how deeply,” he added.

Brazil’s current environment minister, Edson Duarte, said: “Instead of spreading the message that he will fight deforestation and organized crime, he says he will attack the ministry of environment, Ibama, and ICMBio [Brazil’s federal environment agencies]. It’s the same as saying that he will withdraw the police from the streets.”

Speaking to the O Estado de S. Paulo newspaper, Duarte said: “The increase of deforestation will be immediate. I am afraid of a gold rush to see who arrives first. They will know that, if they occupy illegally, the authorities will be complacent and will grant concordance. They will be certain that nobody will bother them”.

Bolsonaro’s environment policies are tied to racist attitudes toward minorities and Brazil’s Indigenous peoples. In a speech last year, he said: “Minorities have to bend down to the majority…The minorities [should] either adapt or simply vanish.”

Expressing a view common to military circles, he has claimed, without evidence, that Indigenous land rights are part of a western plot to create separatist Amazonian states supported by the UN.

“Sooner or later, we will have dozens of countries inside [Brazil]. We won’t have any interference in these countries, the first world will exploit the Indians, and nothing will be left for us,” he said last year.

Bolsonaro has promised to open Indigenous lands to mining and other economic activities. About 13% of Brazil’s territory is recognized Indigenous lands, most of them in the Amazon. They are a major barrier to protect the forest; only 2% of rainforest deforestation has occurred inside Indigenous territory.

The law protects Indigenous rights. Article 231 of the 1988 Constitution states that Indigenous peoples have “original rights over the lands that they have traditionally occupied”, although the land belongs to the state and they have no ownership rights over minerals.

But there are concerns about whether Bolsonaro will respect these laws. Several analysts have warned Brazil could slip towards authoritarian rule. These fears have increased in the past weeks. His running mate, General Antônio Hamilton Mourão, has argued for a new constitution without popular participation and raised the possibility that Bolsonaro could proclaim a self-coup.

Both Bolsonaro and Mourão have defended the excesses of Brazil’s military dictatorship, which displaced and killed (intentionally or through diseases) thousands of Indians in the Amazon, amid an effort to build roads and hydroelectric dams in the forest. The armed forces have never recognized any wrongdoing.

“If he wins, he will institutionalize genocide,” said Dinamam Tuxá, the national coordinator of Brazil’s Association of Indigenous Peoples, in a phone interview with Climate Home News. “He has already said the federal government will no longer champion Indigenous rights, such as access to the land. We are very scared. I fear for my own life. As a national leader, I am sure I will be punished by the federal government for defending the rights of the Indigenous peoples.”

Ministry of Environment No More

During the campaign, Bolsonaro promised he would abolish the ministry of environment and transfer its functions to the ministry of agriculture. The agriculture portfolio will be handed to politicians from the “beef caucus”, a conservative group of lawmakers who control about one-third of Congress and have opposed Indigenous land demarcations and advocated for the reduction of conservation units, among other measures, to expand the agriculture frontier. They have formally endorsed Bolsonaro.

In several speeches, he said he would end the “fine industry” run by Ibama and ICMBio to control illegal mining, deforestation, and logging. He used his first post-election statement to vow to neuter Ibama.

This is personal for Bolsonaro. In 2012, he was caught fishing illegally inside a federal reserve off the coast of Rio de Janeiro and was issued a $2,700 fine. Since then, as a member of Brazil’s chamber of deputies, he has targeted Ibama, going as far as presenting a bill that forbids its agents from carrying weapons, even though they operate in some of the most dangerous areas of the country.

Ibama will be stripped of its environmental licencing powers, he said during the campaign. These will be redistributed to other official agencies. That means, for instance, the federal agency will no longer be able to contain controversial projects such as the reopening of the disused BR-319, an 890-kilometre highway that cuts from one of the most preserved areas of the Amazon to São Luiz do Tapajós, a giant hydroelectric plant planned to be built in an area inhabited by the Munduruku Indigenous group and river dwellers.

BR-319, which connects Manaus to Porto Velho, is especially troublesome, as it will allow for secondary roads. According to a study by NGO Idesam, an area as big as Germany and Belgium combined is under its influence and will become more vulnerable to land-grabbers and deforestation. Recent attempts to pave it have been barred by Ibama.

“He names Ibama and ICMBio as his number one public enemies and has given several messages that he will reverse environmental and social laws,” said André Guimarães, director of the Amazon Environmental Research Institute. “However, one thing is what he says during the electoral campaign. Another thing is what he will be able to do if he takes office.”

Guimarães said that recently the beef caucus has tried to relax environmental and slave labour legislation, but failed in most of those attempts due to strong opposition.

“He will try and he is obstinate, but it’s up to civil society to react against it. It will be a scenario with intense and almost permanent disputes,” he said. “We must be indignant.”