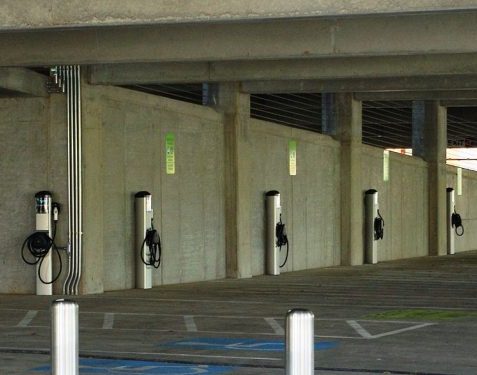 A Calgary couple and their condominium board are locked in a battle over electricity costs, after the building cut off the couple’s access to power to charge their electric vehicle.

“Kevin Kruse and Sydney Cooper bought a Chevy Volt—a hybrid that runs on gas or electricity—about two years ago, and said at first they had no problem charging the car by plugging it into the 110-volt outlet at their assigned spot,” CBC reports. “But things changed about eight months ago after a new condo board president was elected at their building.”

One morning, the hook-up was cut off. When it was restored, the board applied a C$33 monthly fee to cover estimated electricity costs.

“The condo has no official policy in place and hasn’t provided documentation on the increased usage amount related to their vehicle charging,” CBC states.

Pembina Institute Director of Electricity Binnu Jeyakumar said this kind of conflict will become more common as EV use increases. “To me, stories like this are part of a bigger trend,” she said. “It definitely is challenging for the people involved right now, but they’re trailblazers, and we’re going to see more and more of this.”

Jeyakumar added that electric car sales have nearly doubled in Alberta since last year, and are expected to grow tenfold world-wide by 2025 (or sooner)—by which time they’ll cost the same to own and operate as an internal combustion vehicle.

“I think we’re in a place where we were when people were starting to bring computers into their homes, and starting to figure out Internet dial-up,” she said. “Think about what it meant for telecom companies then when they were trying to figure out, ‘how are we going to provide this new service, we don’t even know what the Internet is?’ We’re at that stage now.”

As that trend picks up, condo owners and boards will be at ground zero, since home power supplies are expected to be the most common option for EV users to charge their vehicles. “We’re probably going to need a mix of solutions, particularly when you’re looking at trying to retrofit existing condo buildings,” Eric MacNaughton, co-lead for Calgary’s new EV strategy under its Climate Resilience Plan, told CBC. “When they were first designed, nobody was actually thinking about electric vehicles.”

[Editor’s note/disclosure: We bought our EV in January, and by coincidence, I was invited elected armtwisted to join our condo board a couple of weeks later. The biggest question from other unit owners was whether they would end up paying for our electricity. There were no problems once we made it clear that we fully intended to cover our own costs.]