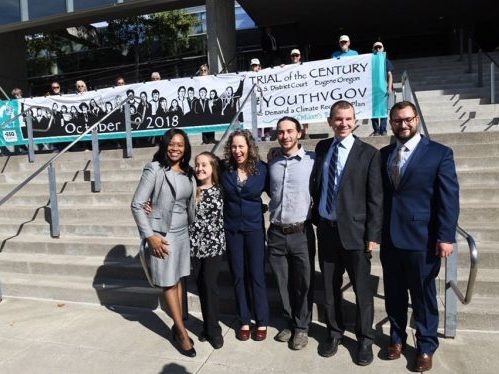 A landmark climate lawsuit by 21 youth plaintiffs will go to trial October 29 in Eugene, Oregon, after a U.S. district judge shot down the Trump administration’s latest effort to halt discovery and trial in the case of Juliana v. United States.

In a ruling Monday, Judge Ann Aiken “rebuked claims by the Trump administration that the suit falls under the Administrative Procedures Act (APA),” which “outlines procedures for judicial review when plaintiffs make claims against a federal agency,” Climate Liability News reports. “She also brushed off claims by the federal government that the young plaintiffs lacked standing in the case, ruling that the plaintiffs—who have submitted depositions and other evidence suggesting they have been harmed by the impacts of climate change—have demonstrated they have been harmed, that harm will continue, and the harm can be attributed to the defendants.”

“Federal defendants have admitted that from 1850 to 2012, CO2 emissions from sources within the United States, including from land use, comprised more than 25 [percent] of cumulative global CO2 emissions,” Aiken wrote.

She also quashed the government’s argument that climate policy-making belongs to the legislative and executive branches of the U.S. government, not the courts. “Courts have an obligation not to overstep the bounds of their jurisdiction, but they have an equally important duty to fulfill their role as a check on any unconstitutional actions of the other branches of government.”

Julia Olson, executive director and chief legal counsel of Our Children’s Trust, said the court “continues to provide well-reasoned decisions that narrow and appropriately frame the heart of this case for trial.” She added that “we are finalizing exhibits for trial, and our experts and plaintiffs have booked their tickets to Oregon. We are ready to bring all of the facts forward and prove these youths’ case once and for all.”