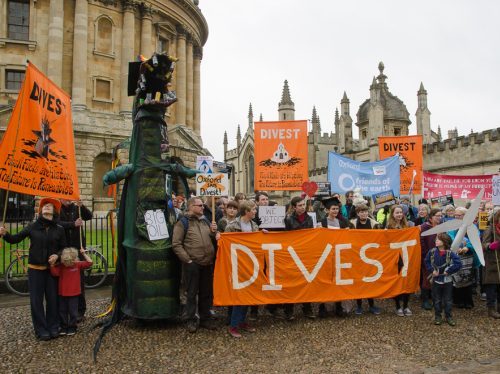 Public relations campaigns to “combat” the growing movement against fossil fuel divestment were a primary topic of conversation when the annual Oil and Money conference gathered last week at the luxurious Intercontinental London Park Lane hotel.

The conference opened on the same day the Intergovernmental Panel on Climate Change issued its landmark report on pathways to 1.5°C average global warming.

“The three-day meeting—a ‘who’s who’ of the global oil and gas industry—is co-hosted by the New York Times Company and Energy Intelligence and is attended by more than 500 senior level executives from the industry,” DeSmog UK reports. “The overwhelmingly male lineup of speakers includes some of the most influential CEOs in the oil and gas sector,” including Bob Dudley of BP, Ben van Beurden of Shell, and Patrick Pouyanné of Total, plus senior executives from Chevron, ExxonMobil, Glencore, and Saudi Aramco.

“For the past few years, campaigners have protested outside The Dorchester Hotel on Park Lane, where the conference holds its annual gala dinner, to denounce how big polluters come together to discuss how to make more money from exploiting untapped oil and gas reserves,” DeSmog states. “But this year, campaigners themselves were part of the conference’s agenda. For the first time, the conference includes a panel discussion on how oil and gas companies can ‘survive the energy transition’ and what they ‘need to do on the PR front to combat the growing fossil fuel divestment movement’.”

“Their business model revolves around continued extraction of fossil fuels, and if we are going to stop the destruction of our climate, we need to switch to renewable energy immediately,” said Jessie Amadio of Fossil Free London, who told DeSmog the fossil execs are “not welcome in London”. The fossil execs, she added, “are trying to subvert the divestment movement through PR, rather than propose a real alternative to fossil fuels to tackle climate change.”

“This shows that we are winning,” added divestment campaigner Hannah Staab. “The divestment movement is not on the fringes anymore, but it is becoming mainstream.”