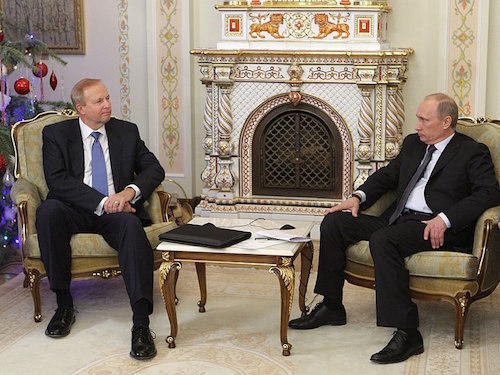 The oil industry will have to invest trillions of dollars in what industry newsletter Upstream calls an “aggressive Paris Climate Accord compliance scenario”, and fossil divesters and protesters represent a threat to energy security and the global economy, BP CEO Bob Dudley told last week’s Oil and Money conference in London.

Maintaining that “many trillions of dollars of investment in oil and gas will still be required to counter the substantial decline rates of existing fields” while implementing the Paris deal, Dudley warned of “serious and far-reaching consequences” if oil and gas exploration receives insufficient financing. “I believe the more serious systemic risk comes from under-investment in oil and gas exploration and production, not over-investment,” he told participants in the elite annual event.

In Dudley’s imagined future, global oil demand falls 10%, and renewables supply 33% of the world’s energy by around 2040. “Renewables are growing at a remarkable rate,” he said, “but we still need to meet the remaining two-thirds of demand—and oil and gas have a crucial role to play.”

Global spending on oil and gas exploration hit US$510 billion this year, after falling from a peak of $900 billion in 2014, S&P Platts reports. “Are we now off to the races again?” Dudley asked. “We’re spending. [But] my sense of the industry [is] it learnt such a painful lesson: capital discipline is really important.”

He said BP is supporting an ExxonMobil-funded carbon tax lobby, Americans for Carbon Dividends, which would launch a U.S. carbon price at $40 per tonne but put an end to carbon litigation against fossil producers that understood the carbon crisis decades ago but chose to fund climate denial, rather than climate action.

“Dudley said a race to renewables is not enough for oil and gas companies to meet the Paris goals on its own,” Upstream reports. “Instead, oil companies must be in a race to lower emissions by all means possible.” And that makes climate risk disclosure activists, with their emphasis on future fossil fuel projects becoming stranded assets, a danger to an industry suddenly exposed to what the Seeking Alpha investment blog calls “arbitrary targets and legal challenges”.

“Suppose $2 trillion less were invested than actually required to meet demand,” Dudley said. “The impact of such under-investment on financial stability could be much more far-reaching.”

(Dudley was actually echoing research and analysis by Carbon Tracker, Germanwatch, and Bank of England Governor Mark Carney and his Financial Stability Board, and in the journal Nature Climate Change. And he was consistent with SNC-Lavalin’s report last November that the world’s biggest investor-owned petroleum companies planned to increase their exploration budgets 20 to 30% in 2018 to continue adding to their unburnable oil and gas reserves.)

With BP’s overall future scenario in mind, Dudley cast relatively high oil prices as a threat to the global economy, adding that the company bases its planning on crude trading in the $60- to $65-per-barrel range over the next decade, S&P Platts writes. At around $84 per barrel, he said, “I think we’re a bit off the fairway on an oil price today that’s good for the world.”

He also cautioned that economic sanctions on Russia’s major oil and gas producers would do great harm to the European continent. “If sanctions were put on Rosneft or Lukoil or Gazprom, like what happened to Rusal, you would virtually shut down the energy systems of Europe,” he said, adding that BP has been careful to comply with sanctions in its own interactions with Rosneft—on whose board of directors he serves.

“I work really carefully to make sure our work and what I do is always within the bounds of the sanctions,” he told participants. “I’m very transparent about it, talk to U.S. government officials about it. It’s a financial investment.”

Massive Growth of Petrochemicals, Plastics Set to Undercut Emission Reductions in Other Sectors