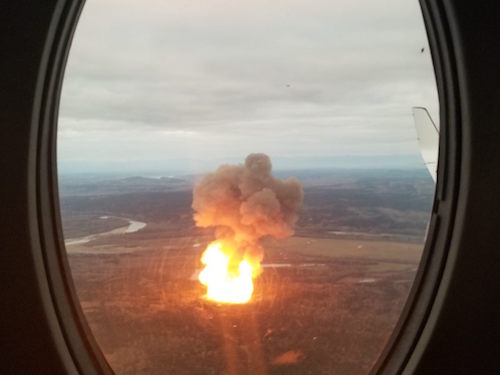 A spectacular natural gas pipeline explosion in British Columbia raised serious concerns earlier this week about the resilience of the province’s energy supply, with about 700,000 people at risk of losing access to gas and the University of British Columbia briefly concerned that it would be cut off.

The October 9 explosion on Enbridge’s Westcoast Mainline pipeline near Shelley, about 15 kilometres northeast of Prince George, “resulted in an explosion and a massive fire,” Business In Vancouver reports. It affected 70% of FortisBC’s gas customers across Greater Vancouver, the lower Fraser Valley, Prince George, Quesnel, and William’s Lake.

“At this time, we cannot speculate about how long it will take to resolve the situation,” said Enbridge spokesperson Michael Barnes.

“Every business, there’s a boiler in the basement that supplies hot water and heating. I would expect widespread and significant inconvenience and probably some impacts on the electrical system as people end up using stove tops to heat water,” added David Craig, executive director of the Commercial Energy Users Association.”

In a report picked up by industry newsletter JWN Energy, Business In Vancouver adds that FortisBC “has backup supplies of natural gas in the form of liquefied natural gas at its Tilbury Island terminal,” intended to meet peak demand in Greater Vancouver. “It’s not clear, however, whether the supply is significant enough to make up for a major loss of pipeline gas, or how quickly it can get into the system.”

When the explosion occurred, about 100 members of the Lheidli T’enneh First Nation were evacuated, along with residents of a nearby subdivision. “I thought it was thunder at first, because it was loud, banging kind of noises,” said resident Megan Clark. “I look out my window and I see this huge forest fire, so I thought maybe a house blew up.”

The evacuation was a quick and familiar experience for the Lheidli T’enneh since “we sort of trained for it…because of the wildfires,” said Chief Dominic Frederick. “Everything was just left behind.”

In the wake of the explosion, FortisBC asked customers to turn down their thermostats and reduce their appliance use, and approached Washington State’s Puget Sound Energy and Cascade Natural Gas for emergency supplies. “We still need more customers to reduce their natural gas usage as much as possible for now, as we continue to work with Enbridge and confirm the impact on the system,” the company said Wednesday afternoon.

“We recognize that in some parts of B.C. it may be impractical to turn off thermostats due to cold weather. Even turning the temperature down as much as possible and reducing hot water use and other natural gas usage will help.”

[Yes, but fossil utilities say it’s distributed renewables that will leave us freezing in the dark.—Ed.]

UBC sent out an alert at 6 PM Wednesday, warning that its campus on Vancouver’s Point Grey might face a gas shortage, but later said it no longer expected any impact. A smaller gas pipe running alongside the Westcoast Mainline had been shut down as a precaution, forcing Washington State refineries to cut output and driving up gasoline prices along the west coast, Bloomberg reports. Enbridge said that line would be returned to 80% of its normal capacity.