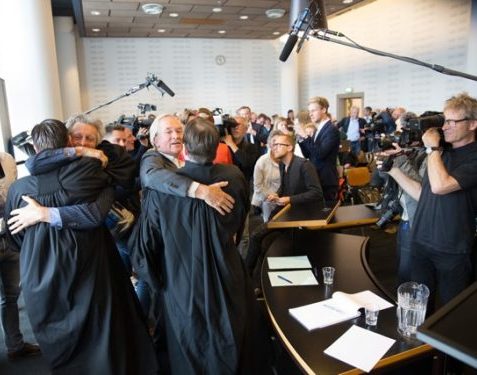 An appeal court in The Netherlands put “all world governments on notice” this week, upholding a previous, historic legal order that the national government accelerate its plans to cut greenhouse gas emissions.

“Climate change is a grave danger,” ruled Judge Tan de Sonnaville. “Any postponement of emissions reductions exacerbates the risks of climate change. The Dutch government cannot hide behind other countries’ emissions. It has an independent duty to reduce emissions from its own territory.”

The ruling in The Hague came just a day after the Intergovernmental Panel on Climate Change (IPCC) released its landmark scenario report on pathways to 1.5°C average global warming, concluding that humanity has just 12 years to cut emissions by 45%. It affirmed a lower court decision in June 2015 that ordered the country to cut its emissions 25% in five years.

“Appeal court judges ruled that the severity and scope of the climate crisis demanded greenhouse gas reductions of at least 25% by 2020—measured against 1990 levels—higher than the 17% drop planned by Mark Rutte’s liberal administration,” The Guardian reports. “The ruling—which was greeted with whoops and cheers in the courtroom—will put wind in the sails of a raft of similar cases being planned around the world, from Norway to New Zealand and from the UK to Uganda.”

In the course of the appeal, government lawyers “had argued that the judges were ‘sidelining democracy’ by trying to force a policy change, but the court found government proposals ‘unacceptable’, in a stinging and wide-ranging judgement that leaned heavily on the European Convention of Human Rights,” the UK-based paper adds.

“The special report of the IPCC emphasizes that we need to reduce emissions with much greater urgency,” said Urgenda campaign director Marjan Minnesma. “The Dutch government knows that as a low-lying country, we are on the front line of climate change. Our own government agencies recently concluded that in the worst-case scenario, sea levels might rise by 2.5 to three metres by the end of the century. The court of appeal’s decision puts all governments on notice. They must act now, or they will be held to account.”

“Governments can no longer make promises they don’t fulfill,” added Dutch Green Party leader Jesse Klaver. “Countries have an obligation to protect their citizens against climate change. That makes this trial relevant for all other countries.”

While The Netherlands has committed to a 49% emissions cut by 2030, its reductions currently stand at just 13%, and The Guardian says that figure has barely changed since 2012.

“The Dutch government must now decide whether to appeal to the Netherlands’ supreme court, or explain how it will nearly double the entire amount of greenhouse gas emission cuts it has made since 1990 within one year,” writes reporter Arthur Neslen. “One of two newly opened coal plants would have to be shut down to comply with the original court ruling, according to a report by CE Delft in 2016.”

Well-fed world can slow warming too