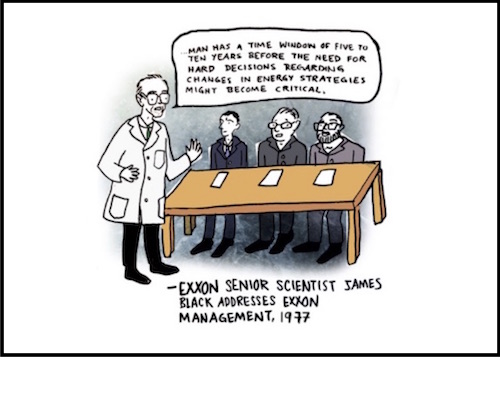 ExxonMobil is donating US$1 million over two years to Americans for Carbon Dividends, a non-profit founded by former U.S. treasury secretary James Baker III and secretary of state George Shultz that is proposing a $40-per-tonne tax on carbon dioxide.

But while the measure would increase the cost of Exxon’s product, the contribution isn’t as surprising—or philanthropic—as it seems at first glance.

“Recently, ExxonMobil joined the Climate Leadership Council, which was created to develop the Baker-Shultz plan, under which a carbon tax would be established at $40 a ton and increase steadily over time,” the Washington Post reports. “The revenue would be returned to Americans on an equal and monthly basis via dividend checks, direct deposits, or contributions to their individual retirement accounts,” and “there would be border adjustments to ensure fair trade.”

But there’s a very big catch: the group’s plan for “regulatory simplification” includes “an end to federal and state tort liability for emitters,” a small detail that would cut short a wave of liability cases confronting colossal fossils like Exxon for their role in knowingly causing climate change.

Exxon still received bipartisan accolades for the donation. Americans for Carbon Dividends senior advisor Mark McKinnon, a veteran Republican operative who worked for George W. Bush, called it “a watershed moment,” adding that “with their participation, you’ll see a lot of other corporations who have been closely watching this process decide the time is right for them to lend their support, as well.”

“A company getting behind its product being taxed is a very rare thing,” added Harvard economist Lawrence Summers, and former treasury secretary under President Barack Obama. “This reflects a new and important awareness that we have to do big things about climate.”

Yet “the size of the donation isn’t large by ExxonMobil standards,” the Post notes. “The company spends that much on its capital investment program every 20 minutes or so. And a carbon tax faces widespread opposition in Congress.”

Kert Davies, director of the Climate Investigations Center, said Exxon has been backing the plan from the start, but is only now supporting it publicly. “The most interesting thing to me is how Exxon has been behind this the whole way but was intentionally hidden from view,” he toldClimate Liability News. “Are they shy? No, they know the optics.”

In a 14-part Twitter rant, Harvard and MIT post-doctoral researcher Geoffrey Supran has more on those optics.

“Recently, Exxon pledged to give $1 million over 2 yrs to support a carbon tax advocacy group. The reporting on this has been breathless & glowing, and for Exxon’s PR team, a terrific return on investment. But let’s pull back the curtain a bit on this carbon tax plan,” he writes.

“First, this is straight-up PR. Exxon’s announcement comes one day after the #IPCC’s #1o5C report warned the world that hundreds of millions of people will die if we don’t get off fossil fuels, starting yesterday.

“On 8 Oct, the headlines were ‘IPCC climate change report calls for urgent action to phase out fossil fuels’. On 9 Oct they were ‘ExxonMobil gives $1 million to promote a carbon tax-and-dividend plan’. This is PR Crisis Management 101: Change the narrative.

“Second, it now appears that this carbon tax plan—originally publicized as ‘The Baker-Schultz Plan’, the brainchild of Very Serious People in the GOP—is actually Exxon’s Trojan Horse.

“Head of PR for the carbon tax advocacy org that Exxon will fund is Richard Keil, a former senior PR advisor for…Exxon. Keil is managing director for Hill+Knowlton, the firm that represented tobacco companies as they tried to escape liability. This is a well-oiled strategy.

“Third, this carbon tax plan is not a strategy for tackling climate change. It is an industry-led gambit to get fossil fuel companies off the hook for billions in climate damages and denial, while making the market more predictable so they can keep profiting from oil and gas.

“Many reporters have casually brushed over the bit in Exxon’s plan that calls for rollback of regulations and an end to climate lawsuits. This is straight out of Big Tobacco’s playbook (& asbestos & guns). To ignore it is to misunderstand the political economy of a carbon tax.

“(Some reporters may have been taken in by the PR massaging of the Baker-Shultz Plan: ‘Significant Regulatory Rollback’ and ‘End to tort liability for emitters’ has become ‘Regulatory Simplification’ and ‘Liability Rationalization’ (Euphemism of the Year?).) h/t @KertDavies.

“As @JesseJenkins, @drvox and others have articulated better than I can, a low-value, isolated carbon tax that polls badly is never going to cut it. Exxon’s proposed tax is 10 to 1,000 times smaller than what the IPCC just said may be necessary to stay below 1.5C.

“Who knows, maybe I’m too cynical. But my research (and others’) shows that #ExxonKnew for decades about the looming climate crisis, then spent decades and millions of dollars working with PR firms to mislead the public about the science.

“As with the science of climate change itself, the evidence on Exxon’s history of climate tactics points only one way. IMHO, that puts the burden of proof on them to dispel skepticism about their motives. So far, they’re not doing a very good job.

“I’ll give final the word to @drvox: ‘Democrats don’t often act like it, but they are right on climate change. They’re on the right side of history. That’s why fossil fuel companies are reaching out to, ahem, end the impasse. It’s what you do when you’re losing…

“’…Dems should have the courage of their convictions, support the policies they believe most able to pass and most likely to work, and begin negotiations there, not where fossil fuel lobbyists draw the line.’”