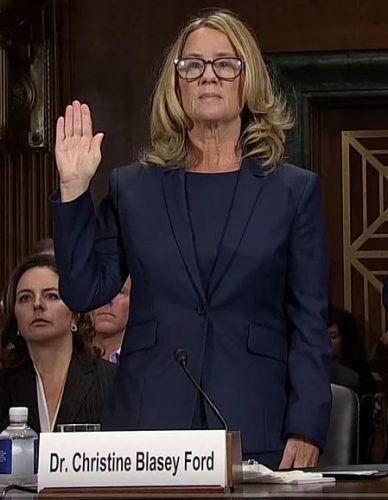 Along with all the other courageous dimensions of her September 27 testimony to the U.S. Senate Judiciary Committee, Dr. Christine Blasey Ford may also have blazed a trail for women in science.

“Rereading her words, what struck me anew was the way she described the assault in clinical terms—the vulnerable state of the adolescent brain and the well-documented impact of childhood trauma—without evading an ounce of her own humanity,” writes Grist reporter Eve Andrews. “It’s a remarkable feat in a time when science itself is undergoing aggressive interrogation.”

Andrews recalls that, throughout her testimony, Dr. Ford “simply and carefully explained the different biological processes that contribute to the sharp memory of certain details and the blurriness of others; the surge in hormones that enabled her to escape; the varied and complicated pathology of sexual assault survivors. It was a relief to hear this in such relatively straightforward terms: You feel this way because this is what your body is doing. It is not a failure of your own will,” Andrews writes.

“I think that it was extra courageous for her to put in the effort to recognize that the science was important and her way of explaining it would be important,” said 500 Women Scientists Co-Founder Kelly Ramirez. The equal and opposite is also true, she added: ironically enough, the public tends to trust scientists more when they show their humanity.

While Dr. Ford’s committee appearance drove a dramatic increase in the number of Americans who believed her testimony that future supreme court appointee Brett Kavanaugh sexually assaulted her when they were teenagers, “I really hope it’s not because of Ford’s position as a scientist that people find her credible,” Maryam Zaringhalam, another 500 Women Scientists senior leader, told Andrews. “I hope it’s because people are starting to understand that this is something that happens to all women, from all backgrounds, of all ethnicities, with all educational experiences.”