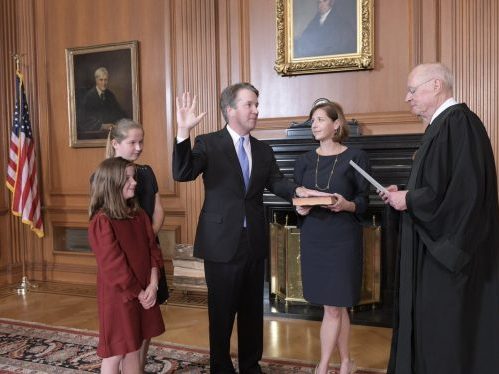 While newly-appointed U.S. Supreme Court Justice Brett Kavanaugh outraged wide swaths of the American public over allegations that he committed sexual violence in his teens and lied under oath to the Senate Judiciary Committee, his performance as a federal appeals court judge also points to “an extensive record of skepticism toward the government’s powers to act on climate change,” InsideClimate News reports.

“In particular, while Kavanaugh has repeatedly voiced the belief that global warming is a serious problem, he challenged the argument that Congress has given the Environmental Protection Agency authority to do something about it,” InsideClimate states. “That means the 53-year-old jurist, who was confirmed on a 50-48 vote by the U.S. Senate on October 6 and sworn in to replace Justice Anthony Kennedy on the U.S. Supreme Court, could harden the high court for the next generation as a blockade to climate action that isn’t explicitly mandated by Congress.”

Kennedy was never a reliable supporter for environmental protection, but supplied the pivotal vote in a 5-4 decision in Massachusetts v. EPA, the case that empowered the federal agency to regulate carbon dioxide as a pollutant.

While the Trump administration is now working on a replacement for the CPP, “Kavanaugh’s views could come into play on a wide range of environmental issues where the executive branch is grappling with advances in scientific understanding of threats to public health and environment on which Congress has been unable or unwilling to act,” ICN notes. The coverage by Marianne Lavelle traces the judge’s past statements on the Clean Power Plan, the U.S. Clean Air Act, and regulation of climate-busting hydrofluorocarbons (HFCs).

“EPA’s well-intentioned policy objectives with respect to climate change do not on their own authorize the agency to regulate,” Kavanaugh wrote, in a majority ruling that struck down the agency’s authority to regulate HFCs. “Congress’s failure to enact general climate change legislation does not authorize EPA to act. Under the Constitution, congressional inaction does not licence an agency to take matters into its own hands, even to solve a pressing policy issue such as climate change.”

That tone and substance may be typical of what Americans can expect from Kavanaugh over the next generation, as he serves out his intensely controversial lifetime appointment  to the Supreme Court.

“Although he takes as craftsmanlike and non-controversial an approach as available, he is often willing to put blinders on to support his interpretations,” said Joseph Goffman, executive director of the Harvard Law School Environmental and Energy Law Program.

“A lot of what the Clean Air Act directs—or I’d say, mandates—the EPA to do is to look at its legal authority as sufficiently expansive to take account of changing science about public health, pollution, and technology,” he added. “In order to support his interpretation, [Kavanaugh] simply has to ignore that reality.”