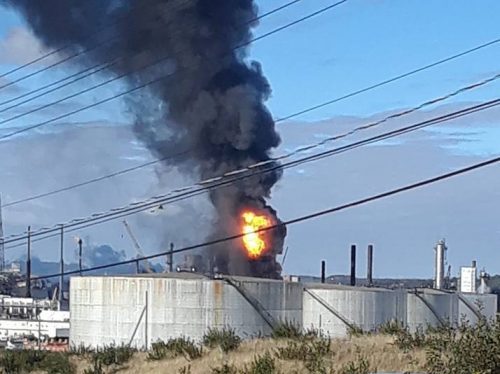 Irving Oil officials were counting their blessings Monday after the human impact from a massive, early morning explosion at the company’s St. John, New Brunswick oil refinery was limited to four minor injuries.

Scott “said there had been a malfunction in the refinery’s diesel treating unit, where sulphur is removed from diesel fuel,” CTV News reports.

“There was quite a shockwave when the blast happened,” said a plant worker who declined to be identified. “The fire did take a number of hours to extinguish, with some of the material that had leaked into the area of the unit that was affected. At times, we were letting that just safely extinguish itself.”

With the refinery shut down for major maintenance, there were up to 3,000 workers onsite, most of them contractors.

After the explosion on St. John’s east side around 10:15 AM local time, “my whole house shook. I thought my furnace had exploded,” said local resident Litsa Daeres.

Gordon Dalzell, chair of the city’s Citizens Coalition for Clean Air, who lives in the nearby Champlain Heights subdivision, said the refinery routinely emits volatile organic compounds that can be hazardous to human health. While the big plume of smoke after the initial explosion was concerning, “I worry more about what you can’t see in terms of pollution that comes from the refinery,” he told CTV. “The pollutants you can’t see or smell, they’re the ones that are of great, great concern, on a regular basis.”

But Dalzell was grateful there were no serious injuries, and said he “hopes the incident will help stakeholders reconsider the continued use of fossil fuels when greener options are available,” CTV notes.

District Chief Mike Carr of Saint John Fire said the incident posed no health concerns beyond the initial smoke plume. “At this time, the incident is stabilized,” he told media.