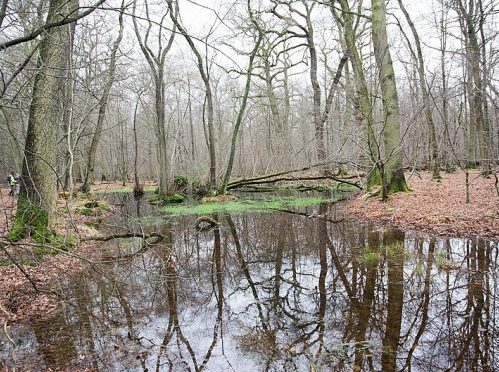 A remnant of Germany’s 12,000-year-old Hambach Forest is temporarily safe from clearcutting, after a senior administrative court in Münster ordered utility giant RWE AG to cease operations until judges could decide on a lawsuit brought by BUND, the German branch of Friends of the Earth.

“Plans by RWE to destroy most of the remaining forest to make way for an extension of its open-cast Hambach lignite mine triggered long-running protests by activists, with some living in the woodlands in treehouses for more than six years to block clearing activities,” Deutsche Welle reports. “In recent weeks, police dismantled treehouses and removed protesters, leaving RWE seemingly free to commence its planned felling of further trees.”

But BUND argued the forest’s conservation value made it subject to the EU’s Habitats Directive. In response, “the Münster court said documents supporting the BUND lawsuit filled several cartons, making it impossible for it at short notice to decide on legal issues of felling or preserving the 100-hectare (250-acre) forest patch located on RWE property,” DW states. The court also rejected the utility’s claim that it must clear the forest in order to maintain the country’s energy supply.

BUND called the decision a “turning point here in North Rhine-Westphalia,” where the Hambach mine supplies adjacent power stations. RWE said the decision might now be delayed until the end of 2020, costing it more than €100 million (US$115 million) in FY 2019 revenue. The company’s shares in Frankfurt were down 10.2% at week’s end.

An hour after the Münster decision, an administrative court in Aachen overruled a police ban on a weekend anti-coal rally, following a right-to-assembly appeal by Naturfreunde Deutschland (Nature Friends Germany). “The Aachen court said it did not share police concerns about public safety at Saturday’s planned rally, saying rules for the arrival and departure of protesters could be resolved through police talking with rally organizers,” DW states. Thousands attended the protest a day later.

In London Monday, Greenpeace members scaled the Germany embassy and unfurled a banner calling on the country to exit coal and protect Hambach Forest, Reuters reports.