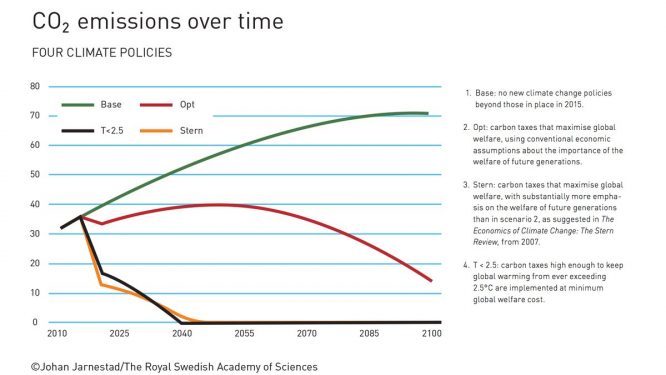 Yale University carbon pricing pioneer William Nordhaus, who spent decades making the case that economic models were failing to account for the effects of global warming, will be one of two U.S. economists to share the 2018 Nobel Prize for economics.

Nordhaus was an early proponent of taxation as the most economically effective remedy for damage to the environment and public health, and later developed the Dynamic Integrated Climate-Economy (DICE) model to assess the costs of climate change, including crop failure and flooding, the New York Times reports. The name of the model, Nordhaus said, was “consciously aimed to suggest that we are gambling with the future of our planet.”

The Nobel committee cited Nordhaus for demonstrating that “the most efficient remedy for problems caused by greenhouse gases is a global scheme of universally imposed carbon taxes.”

“His careful work has long since convinced most members of his own profession,” the New York Times adds. “But Professor Nordhaus sadly noted that he hadn’t convinced the government of his own country.”

“The policies are lagging very, very far—miles, miles, miles behind the science and what needs to be done,” he said after getting word of the award. “It’s hard to be optimistic. And we’re actually going backward in the United States with the disastrous policies of the Trump administration.”

Nordhaus’ co-winner, New York University’s Paul Romer, said it should be “perfectly possible” for the world to take on the immense challenge of a 1.5°C climate future, embodied in yesterday’s special report from the Intergovernmental Panel on Climate Change, The Guardian states.

“One problem today is that people think protecting the environment will be so costly and so hard that they want to ignore the problem and pretend it doesn’t exist,” Romer said. “Once we start to try to reduce carbon emissions, we’ll be surprised that it wasn’t as hard as we anticipated. The danger with very alarming forecasts is that it will make people feel apathetic and hopeless.”

The Nobel Prize committee said its choices were meant to shine a light on the need for international cooperation, in what some observers saw as a rebuke of the Trump administration. “The message is that it’s needed for countries to cooperate globally to solve some of these big questions,” said Goran K. Hansson, secretary general of the Royal Swedish Academy of Sciences.

Florida Declares State of Emergency with Hurricane Michael Due Wednesday