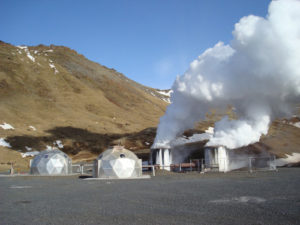 Just as the Intergovernmental Panel on Climate Change issued a landmark 1.5°C pathways report that placed heavy emphasis on the need for viable carbon capture and storage methods, companies based in Switzerland and Canada are reporting progress on technologies designed to meet the challenge.

In Troia, Italy, Swiss-based Climeworks AG said its new plant had produced 4,000 gallons of jet fuel from waste steel plant gases and delivered the product to airline Virgin Atlantic. In Squamish, British Columbia, meanwhile, Carbon Engineering published a peer-reviewed paper in the journal Joule, claiming it had brought the cost of its direct air capture technology US$94 per ton.

In an email to CleanTechnica, CEO Steve Oldham pointed to the IPCC report as a measure of the “immense opportunities and challenges of holding [average global warming] to 1.5°C.” He added that his company’s two carbon removal tools “can be implemented now with minimal disruption and infrastructure turnover, alongside the many other options essential to limit temperature growth.” While “more aggressive commitments and policies are needed to drive the full solution set into market,” he added, “if we get that right we’ll all be better off in a clean energy, low-emission future.”

The Climeworks plant, the company’s third, opened in July under a European Union research program and went into operation last week, Ars Technica reports. It’s designed to “collect carbon dioxide (CO2) from ambient air and pair it with renewably-made hydrogen (H2) to make methane fuel that would add little or no CO2 to the atmosphere.”

The first of Climeworks’ installations captured airborne carbon and filtered it to bind with more acidic carbon dioxide. The second, which captures volcanic CO2 from an Icelandic geothermal plant, recently went into continuous operation without failure, according to co-founder Christoph Gebald. Ars Technica describes that milestone as a cold-weather achievement in the Icelandic climate.

“The new Italian plant will be run for more than 4,000 hours over the next 17 months (that’s just under eight hours a day) in order to demonstrate the viability of fuel production as a potential revenue source for carbon capture,” Ars Technica says. “Gebald said pure captured CO2 could even be processed into jet fuel. When that fuel is burned, he said, it would again create CO2 that could be captured at an arbitrary Direct Air Capture plant and turned back into jet fuel.”