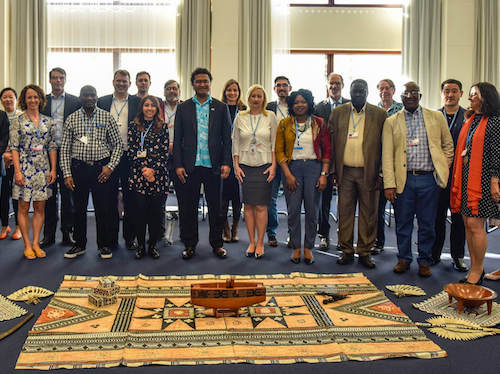 With pressure and momentum building for countries to speed up their action on climate change in the crucial decade between 2020 and 2030, veteran climate negotiator Alden Meyer of the Union of Concerned Scientists (UCS) sees today’s IPCC report on 1.5°C as one of the building blocks for a significant “2020 moment” during COP 24 in December.

When delegates gather in three months in Katowice, Poland, the IPCC’s work will inform a high-level “facilitative dialogue”, aimed at bridging the gap between the targets in the Paris Agreement and the end goal of 2.0°C, now 1.5°C average global warming, that delegates knew their countries would eventually have to meet. The formal language in the Paris deal called for a dialogue “to take stock of the collective efforts of Parties in relation to progress towards the long-term goal,” and to “inform the preparation of nationally determined contributions (NDCs),” the formal but voluntary commitments countries made toward achieving the Paris targets.

Since then, the IPCC’s data-gathering and much of the political activity at subsequent COPs in Marrakech and Bonn have treated the Katowice conference as a focal point for the drive to faster, deeper carbon cuts, and equitable financing for developing countries on the front lines of the climate crisis. Meyer’s post for the UCS traces the key milestones along the way and the hopes and expectations for COP 24.

When Fiji became the first small island state to chair an international climate conference, Prime Minister Frank Bainimarama announced that the facilitative dialogue would be renamed the Talanoa Dialogue, Meyer recalls. “Talanoa is a traditional word used in Fiji and across the Pacific to reflect a process of inclusive, participatory, and transparent dialogue,” the UN climate secretariat explains. “The purpose of Talanoa is to share stories, build empathy, and to make wise decisions for the collective good.”

In this instance, the Talanoa process has asked countries to address three questions about the climate crisis—where we are, where we want to go, and how we get there. And so far—astonishingly, for the formal, adversarial setting of a UN climate conference—Meyer says the dialogue is going well.

In May, the 21 Talanoa sessions conducted during mid-year climate negotiations in Bonn, Germany “displayed a constructive tone and open exchanges between the participants that contrasted sharply with the zero-sum, finger-pointing dynamics that are all too prevalent in the climate negotiations themselves,” he writes. “Everybody talked to each other like people, not like parties,” one participant said.

All of which raises some serious slivers of hope for a deliberative process that will decide whether humanity uses the 2020s to take serious action on climate change, or lets that opportunity slip away. “As these pledges are ‘nationally-determined,’ it is entirely up to each country to decide whether or not to enhance their ambition. But as the science being assessed in the IPCC Special Report makes clear, if the collective ambition of these pledges out to 2030 is not significantly raised, the option of holding temperature increases below 2.0°C—much less anything approaching 1.5°C—will be foreclosed,” Meyer notes.

“But there will be good news in the report as well,” he adds, in a post dated three days before the formal release of the report. “Technological advances and rapid reductions in the costs of photovoltaics, LED light bulbs, and many other climate-friendly technologies over the last several years mean that greater emissions reductions can be achieved at less cost than countries envisioned when they were preparing their initial NDCs in the run-up to Paris. These gains can and should be harnessed for the benefit of the planet in the form of enhanced NDCs.”

But despite momentum for faster action from many different directions, including a climate leaders’ summit convened by UN Secretary General Antonio Gutteres, the IPCC report makes it clear that time is running out—and the leadership will have to come from delegates in Katowice. “These are hopeful developments, but they are not enough,” Meyer writes. “It is at the national and subnational levels that the battle to limit the impacts of climate change will be won or lost.”