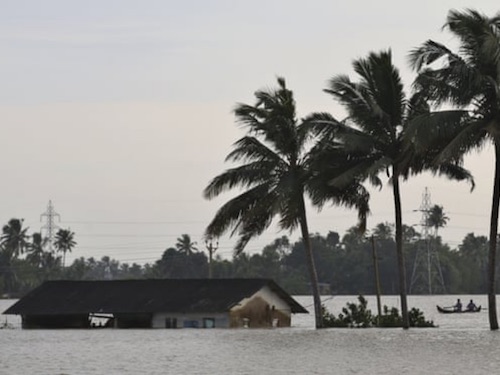 With representatives of more than 130 countries and about 50 scientists gathered in Incheon, South Korea to negotiate final details of the IPCC’s 1.5°C science report, the Washington Post headlined that they were “struggling to find the right words for very bad news.”

“Things that scientists have been saying would happen further in the future are happening now,” Greenpeace International Executive Director Jennifer Morgan told AFP. “We thought we had more time, but we don’t.”

“Many scientists have long known that human-induced climate change could have dire consequences,” added former IPCC vice-chair Jean-Pascal van Ypersele, now a professor of climatology at France’s Université Catholique de Louvain. “Those who have underestimated the severity of climate change are mostly policy-makers.”

Now, the IPCC report has swept much of that history away, shining a spotlight on 1.5°C as the only target that offers legitimate odds of averting the worst effects of climate change.

“At issue is what scientists call the ‘carbon budget’: Because carbon dioxide lives in the atmosphere for so long, there’s only a limited amount that can be emitted before it becomes impossible to avoid a given temperature, like 1.5°C,” the Post explains. “And since the world emits about 41 billion tons of carbon dioxide per year, if the remaining budget is 410 billion tons (for example), then scientists can say we have 10 years until the budget is gone and 1.5°C is locked in.”

That is, “unless emissions start to decline—which gives more time. This is why scenarios for holding warming to 1.5°C require rapid and deep changes to how we get energy.” By the same token, “if we can’t cut other gases—such as methane—or if the Arctic permafrost starts emitting large volumes of additional gases, then the budget gets even narrower.”

The 1.5°C target was originally included in the Paris Agreement, essentially as an aspirational goal, “at the behest of small island nations and other highly vulnerable countries.,” the Post recalls. “But it is increasingly being regarded by all as a key guardrail, as severe climate change effects have been felt in just the past five years—raising concerns about what a little bit more warming would bring.”

“Parts of the planet, like the Arctic, have already warmed beyond 1.5° and are seeing alarming changes. Antarctica and Greenland, containing many feet of sea level rise, are wobbling. Major die-offs have hit coral reefs around the globe, suggesting an irreplaceable planetary feature could soon be lost,” they write. Yet “It is universally recognized that the pledges made in Paris would lead to a warming far beyond 1.5°—more like 2.5 or 3.0°C, or even more,” and that was before the Trump administration withdrew the United States from the Paris deal.

“The pledges countries made during the Paris climate accord don’t get us anywhere close to what we have to do,” said IPCC co-author and Duke University climate specialist Drew Shindell. “They haven’t really followed through with actions to reduce their emissions in any way commensurate with what they profess to be aiming for.”

Grist columnist and veteran climate hawk Eric Holthaus echoes the urgency behind the report, citing the previously-leaked conclusion that world greenhouse gas emissions must peak by 2020—just 15 months from now—and IPCC Chair Hoesung Lee’s comment in his opening address last week that “this will be one of the most important meetings in the IPCC’s history.”

The UN’s preview of the report laid out a pathway to 1.5°C, though it didn’t candy-coat the depth of the challenge: “The transition ‘requires very fast changes in electricity production, transport, construction, agriculture, and industry’ worldwide,” Holthaus writes, “in a globally coordinated effort to bring about a zero-carbon economy as quickly as possible. It would also very likely require eventually removing huge amounts of carbon dioxide from the atmosphere using technology that is not currently available at the scale that would be necessary.”

And “there’s no time to waste: ‘The longer CO2 is emitted at today’s rate, the faster this decarbonization will need to be.’”

Now, the focus will shift to countries’ practical response to the report.

“In this age of rapid warming, the IPCC report is inherently political—there are obvious winners and losers if the world fails to meet the 1.5°C goal,” Holthaus writes. “If the world’s governments were to take the implications of IPCC’s findings seriously, it would be nothing less than revolutionary—a radical restructuring of human society on our planet.”

Much of the discussion leading up to last week’s meetings focused on the difference in human and ecological impacts between average global warming of 1.5 and 2.0°C—and looking back over that coverage, an outsized share of the emerging story was pulled together by Carbon Brief, an award-winning specialty publication based in the UK. This week, Carbon Brief is out with an extensive, interactive feature summarizing the results of about 70 scientific papers on the topic. Notable points (among many others) include:

Vox.com correspondent Umair Irfan casts the report as “a thunderous call to action, laying out what tools we have at our disposal (we have plenty) to mitigate global warming and to accelerate the turn toward cleaner energy.” Leaked drafts of the report concluded that “all mitigation pathways compatible with limiting global warming to 1.5°C by 2100 involve removal of CO2 from the atmosphere,” despite a handful of recent modelling studies that indicated otherwise.

The Daily Mail sees the IPCC report triggering “renewed calls for dramatic action” on the part of the world’s governments, aimed at bringing greenhouse gas emissions to zero by 2050. “That would mean an end to burning fossil fuels to generate power, the replacement of petrol and diesel cars with electric vehicles or other clean alternatives, and no more gas boilers to heat homes, in just a few decades,” the Mail states. “Scientists have also warned that protecting and restoring forests will be key to cutting carbon and drawing down excess emissions from the atmosphere.”

“This report proves that keeping global temperatures to 1.5°C is a necessity, not an ambition,” said Neil Thorns, advocacy director at the UK’s Catholic Agency for Overseas Development (CAFOD). “Faced with such information, we cannot leave poor communities standing on the front line of this potential storm. We must act urgently.”