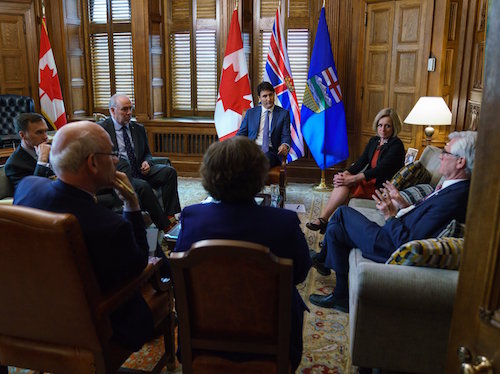 With Conservatives blaming Prime Minister Justin Trudeau for killing one pipeline, the climate community scorching him for salvaging another one, and his pan-Canadian climate plan bleeding provincial support, a chance at a grand bargain on climate action and fossil fuel production “now appears to have been a typically Liberal attempt to be all things to all people,” CBC journalist Jacques Poitras writes in Policy Options.

But Poitras, who travelled the length of the Energy East project to write Pipe Dreams: The Fight for Canada’s Energy Future, says he isn’t sure Trudeau had a choice. While “the twists and turns of the pipeline debate since Trudeau took office and attended the Paris climate summit have put his incrementalist strategy under severe pressure,” global markets and climate action—as much as the tougher climate rules the National Energy Board introduced for the project—may have sealed the project’s fate.

“It was possible to see the new NEB criteria and world market conditions not as mutually exclusive theories of a pipeline’s demise, but as two manifestations of the same reality—that oil’s status as the most vital, defining commodity on Earth was now in question,” Poitras writes in Pipe Dreams. “The new rules reflected the reality of climate change and the possibility of peak demand, and were nudging Canada to adapt.”

While Trudeau and Alberta Premier Rachel Notley both want to see the Trans Mountain pipeline expansion built, he says both governments recognize “that a global shift to renewables is raising questions about oil’s future.” That reality was reflected in his interview with Alberta Environment Minister Shannon Phillips: On one hand, the province’s NDP government needs to recognize “the actual meat and potatoes of what the economy is in this province,” she told Poitras. “We have to make sure that the folks who elected us are seeing the benefit of how we’re starting to move the ship of the economy.” But fossil industry leaders are “looking at a post-combustion future,” and “carbon pricing will reach a point where it will become too expensive to do something silly like combust it because [oil] will be too valuable. That’s a long-term vision.”

Through that prism, Poitras says, Trans Mountain “begins to feel like a last gasp,” and “the talk of peak demand makes Trudeau’s grand bargain on climate look like an attempt to heed the signals the world is sending—to establish a new set of assumptions and ground rules, then let the market sort out which individual projects could withstand climate scrutiny—and to do so carefully, without alienating too many political constituencies or ripping the country apart.”
He adds that “it is, perhaps, a clumsy attempt, a too narrowly focused attempt, a typically Liberal incremental attempt. Given that emissions are still forecast to grow, it may even be a wholly inadequate attempt. But it is an attempt.”