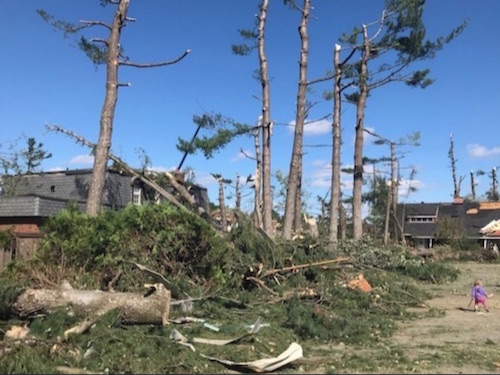 After a half-dozen tornadoes swept through Ottawa and nearby Gatineau, Quebec September 21, residents of Ottawa’s Arlington Woods neighbourhood are dealing with the emotional fallout of seeing the treed area surrounding their homes turned into a logging camp.

“Arlington Woods used to be a kind of forest in the city. Hundreds of 150-foot white pines grew in the neighbourhood. The tornado ripped many of them out of the ground or snapped them like matchsticks,” CBC’s The National reports.

Now, “giant trucks roll by full of logs. The only sound is the buzz of chainsaws. Everywhere it smells of freshly cut pine.” While “the trees were what locals loved about their neighbourhood,” CBC adds, “it was those same trees that destroyed many of their homes.”

The National profiles five Arlington Woods residents affected by the tornado: Two homes were damaged, and at least one needs extensive repairs. A third neighbour, 71-year-old Jim Lahey, sustained no storm damage, “so he drives around the neighbourhood with a trunk full of sandwiches and coffee looking for people to help.”

“It’s what you do. It’s just what you do,” he told CBC. “I just thought, I have to get out of the house. Can’t sit in the house when this is going on.”

Just days after the storm, Ottawa Citizen columnist Dave Reevely was out with an account of how the local utility, Hydro Ottawa, responded to a short, intense interval that took about 200,000 households off the grid.

“This was pretty much a worst-case scenario,” said CEO Bryce Conrad. “Even on a bad day when you get 20,000 or 30,000 people out, it’s usually a very manageable thing.” And “normally, we can get power restored by putting up poles, replacing conductor (wires). It’s frustrating, it takes time, but you know what you’re doing.”

This time, just a short walk away from the utility’s command centre on suburban Merivale Road, “the Merivale transmission station lay in ruins,” Reevely wrote. “A thousand megawatts, about the output of two nuclear reactors, ordinarily runs through it.” But “according Hydro One, which operates it, a roof blew off a building and crashed into the transformers that split the incoming electricity and send it out again to individual neighbourhoods. Much of western and southern Ottawa lost power all at once.”

That was the aspect of the emergency that led Aaron Thornell, communications manager at the Ottawa Renewable Energy Co-operative, to call for greater reliance on distributed generation—in Ottawa, across Ontario, and across Canada—to boost local disaster resilience.

After scanning the weather reports leading up to the storm, Hydro Ottawa took steps to prepare its 130 transmission crew members for a series of long work shifts.

“We sent home our 24/7 crew in the morning, just because we had a sneaking suspicion we might need to bring them in and have them fully rested and ready to go Friday evening,” Conrad told Reevely. When day staff finished their regular work, managers asked them stay late, just in case. “At that point in time we probably would have had 50 or 60 of our crew, fueling up the trucks and ready to go. It’s not something we do lightly.”

Days later, the work continued, with utilities in adjacent states and provinces offering more outside volunteers than the region could handle. While legislation permits hydro crews from working around the clock—the legal limit is a double shift— “some of them were just sleeping on couches, sleeping in trucks in the garage,” Conrad said. “They’d still be working if we didn’t send them home.”

While the local utility generally won accolades for its disaster response, cell phone companies have some explaining to do and some work ahead. The backup batteries in cell towers only lasted a few hours, CBC reports, so an essential local communications network crashed when it was needed most. Much of the city was left scrambling to find locations with generators—not just to track down coffee, but to charge their phones.

[Local flavour: After bringing in an emergency generator that apparently filled the space in an 18-wheel transport truck, our neighbourhood supermarket became a favourite charging point. Our own household just plugged in to our trusty Chevy Bolt. Over a three-day span with no power, our local driving wasn’t nearly enough to run down the battery, and we never had to rely on gas pumps taken out of service by the lost transmission station. As Aaron Thornell said in his post, it’s about local resilience.—Ed.]

Public Interest Advocacy Centre Executive Director John Lawford noted that Canada has no standards for how long cell phone systems should be able to operate in an emergency.

“It’s probably a good idea for the CRTC [the Canada Radio-television and Telecommunications Commission], who is the primary regulator, or Public Safety [Canada] to get this back on the public agenda,” he told CBC. “Because there are, at the moment, no requirements for any of the companies to do better than best efforts.”

“As the electrical outage dragged into the following day, many Ottawa-area residents—even those who had managed to keep their phones charged—found their cell phone service slowed to a crawl, with signal strength at only one bar or no service at all,” CBC recounts. The impact extended to one of the key managers overseeing the emergency response.

“I had to leave my house and drive into town until I found a couple of bars so I could communicate with my emergency operations centre,” City Manager Steve Kanellakos told city council. “I was sitting in my car in my pyjamas.”

University of Ottawa electrical engineering professor Claude D’Amours said standard cell tower batteries carry two to four hours of charge. Higher-capacity units can run 16 to 24 hours, and “in the critical areas they may even have diesel generators.” But former CRTC commissioner Tim Denton, who led a review of Canada’s 9-1-1 system, said “somebody has got to be concerned” about cell network vulnerability.

“My information is simply that everything is extremely vulnerable to electrical breakdown,” he told CBC. “That batteries have a fixed life. That they could, with greater expense, be made to last longer, but that our extreme vulnerability arises because of a dependence on communications and electricity to sustain that.”

One of the questions surrounding the local disaster—sometimes spoken, sometimes unspoken—was whether the astonishing weirdness of a tornado hitting Ottawa was driven by a changing climate. While the science of linking specific severe weather events to the climate crisis is advancing rapidly, the balance of expert opinion indicates that a limited historical record makes attribution more difficult with tornadoes.

“Tornadoes are the kind of extreme event where we have the least confidence in our ability to attribute the odds or characteristics of individual events to an influence of global warming,” Stanford University earth system scientist Noah Diffenbaugh told the New York Times in August. That’s because the population increases, Doppler radar systems, and rise of social media that have made reporting more reliable are all recent occurrences.

“When it comes to extreme heat, for example, researchers can mine independent temperature records that stretch back more than a century. This historical record helps them assess, as they have this summer, that a heat wave is in keeping with human-driven changes to the climate, rather than just natural variation,” the Times explains.

“Tornado research, by contrast, does not benefit from a long data record. Until the 1990s, [U.S.] tornado data was primarily based on someone spotting a tornado and reporting it to the National Weather Service. Since many tornadoes are small and last only a few minutes, some of them have presumably gone unnoticed.”

At this point, some climate models show an uptick in tornadoes at the current 1.0°C of average global warming, while others don’t. By 2.0°C, the Times states, the frequency increases. While the link back to climate change may already be there, Diffenbaugh said, “we can’t distinguish the signal from the noise.”