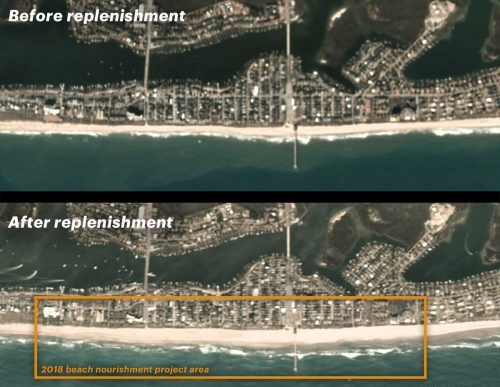 Local ecosystems are being harmed and rich coastal landowners are the main beneficiaries as the U.S. continues to devote post-hurricane relief funds to efforts to rebuild eroded shorelines in states like New York and North Carolina.

“To their advocates, these so-called beach nourishment initiatives are crucial steps in buffering valuable oceanfront properties from storm damage and boosting local economies that rely on tourism,” ProPublica reports. “But such projects replenish the same vulnerable areas again and again, and disproportionately benefit wealthy owners of seaside lots.”

U.S. agencies, often the Army Corps of Engineers and the Federal Emergency Management Agency (FEMA), have spent US$9 billion to rebuild beaches since 1923, including $828 million in North Carolina sinc3 1939, according to a Western Carolina University (WCU) database.

Citing WCU geologist Robert Young, the U.S. investigative publication adds that “pumping millions of cubic yards of sand onto beaches can cause environmental damage, according to decades of studies. It kills wildlife scooped up from the ocean floor and smothers mole crabs and other creatures where sand is dumped.”

After multiple replenishments in the Rockaways in New York, which were devastated by Hurricane Sandy in 2012, “the only foraging shorebird you typically see is a seagull with a french fry in its mouth,” Young said.

Part of the problem is that “this is literally a never-ending commitment,” he added. “I think most people would probably agree, people in Kansas don’t have an interest in holding every beach in America in place.” While “newly nourished beaches suffer less erosion after storms than nonreplenished beaches,” ProPublica notes, “the protection doesn’t last, as wind and wave damage chip away at the shore.” In North Carolina, one beach has been restored 31 times since 1955, while “North Topsail Beach, part of a barrier island northeast of Wilmington, has gotten fresh sand just about every year since 1997.”

While replenishments help beach economies, a ProPublica analysis found that the 16 North Carolina communities directly behind the state’s beaches are 94% white, with 25% of homes worth more than $500,000—compared to a 7% state average. In Wrightsville Beach, a town of 2,500 that has received $51 million for beach nourishment since 1990, a $4.25-million, six-bedroom home recently went on sale with a promise of “180 degree views of the Atlantic Ocean”, from a vantage point “tucked behind 200 feet of protective dunes.”

A key factor determining the mix of beach projects is an Army Corps process that “prioritizes projects that would prevent the most amount of damage per dollar spent. This tends to favour beach building in high-income communities full of pricey properties,” ProPublica states. The agency typically funds projects where benefits are expected outweigh costs at least 2.5-fold, and “poor communities can’t meet that criterion.”

Which contributes to the searing reality that “the towns that get funding need to be politically connected and prosperous enough to carry some of the costs,” write reporters Lisa Song and Al Shaw. University of Virginia history professor Andrew Kahrl “said he couldn’t think of a single project that primarily benefited people of colour. His research shows how the historically black communities that lived along the Carolinas’ coast were forced out by developers and federal infrastructure projects, including some built by the Corps.”

Relocation Due to Climate Impacts Can Take Community Needs Into Account