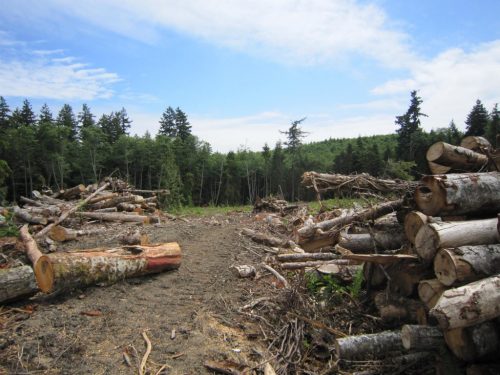 A group of 217 scientists, educators, and land managers signed an open letter last month, opposing a measure in the 2018 U.S. Farm Bill to adopt increased logging as an easy—but largely ineffective—response to wildfires.

“One of the favourite responses of some politicians to devastating wildfires is to call for increased logging on public lands,” Wildfire Today explains. But “logging does not eliminate forest fires. For example, in a clearcut there is still fuel remaining, some of which can spread a fire faster than a forested area.” Clearcuts also contain “dry, easily ignitable vegetation that is even more susceptible to propagating a fire from airborne burning embers up to a mile away from the main fire.”

The scientists state that “active management” of a forest can take many different forms, and must be clearly defined before anyone can draw conclusions on how effectively it will control a wildfire. “Management can either increase or decrease flammable vegetation, is effective or ineffective in dampening fire effects depending on many factors, especially fire weather, and has significant limitations and substantial ecological trade-offs.”

The most common management approach to reduce fire risk and intensity is to thin the forest, and the technique “can reduce fire severity in certain forest types for a limited period of time,” the letter adds.

“However, as the climate changes, most of our fires will occur during extreme fire weather (high winds and temperatures, low humidity, low vegetation moisture). These fires, like the ones burning in the [western United States] this summer, will affect large landscapes, regardless of thinning, and in some cases, burn hundreds or thousands of acres in just a few days. Thinning large trees, including overstory trees in a stand, can increase the rate of fire spread by opening up the forest to increased wind velocity, damage soils, introduce invasive species that increase flammable understory vegetation, and impact wildlife habitat. Thinning also requires an extensive and expensive roads network that degrades water quality.”

As well, when it follows a fire or insect infestation, “post-disturbance clearcut logging hinders forest resilience by compacting soils, killing natural regeneration of conifer seedlings and shrubs associated with forest renewal,” the authors state. It “increases fine fuels from slash left on the ground that aid the spread of fire, removes the most fire-resistant large live and dead trees, and degrades fish and wildlife habitat. Roads, even ‘temporary ones,’ trigger widespread water quality problems from sediment loading. Forests that have received this type of active management typically burn more severely in forest fires.”

The letter attributes the recent increase in wildfire activity to climate change, “coupled with expansion of homes and roads into fire-adapted ecosystems and decades of industrial-scale logging practices.” It recommends a series of measures to protect vulnerable homes, combined with “a comprehensive response to climate change that is based on clean renewable energy and storing more carbon in ecosystems.”