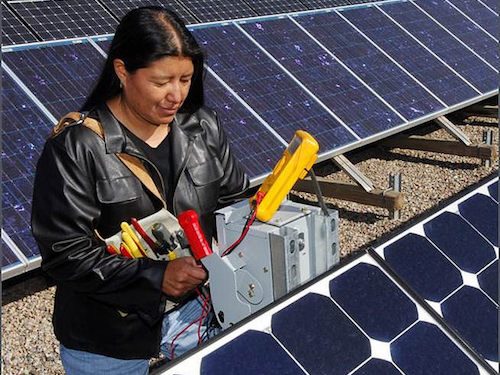 “Each day, more than three million Americans wake up and get to work building our clean energy economy,” E2 states. “These workers install solar panels atop our homes and commercial buildings, manufacture wind turbines, and reduce wasted energy by making our homes, schools, and offices more energy efficient. And they now work in every zip code in the country.”

The total count across 50 communities in 33 states: 1,286,816 jobs in energy efficiency and 328,336 in renewables as of May 2018. The total “includes all clean energy jobs categories, including solar, wind, energy efficiency, clean vehicles, battery storage, advanced biofuels, low-impact hydro, and other areas,” E2 states. (Disclosure: The Energy Mix publisher Mitchell Beer is a member of E2.)

Those “top 50 metros” account for 38% of all the clean energy jobs across the country—reinforcing E2’s point that this work force is both concentrated and widespread.

The analysis reveals that:

And E2 notes that “clean energy jobs are local jobs that cannot be outsourced.”

“I enjoy it, you know,” said steel press operator Paul Golphin of Cleveland, Ohio. “I am helping to build the future. We need more clean energy, making us not so reliant on fossil fuels, and we are bringing jobs back to the community. All that is our future.”

“I was looking for a profession with longevity and a good future,” said solar site assessor Kim Griffin of Amherst, Wisconsin. “That’s why I went with renewables.”

“Our work in providing cost-saving energy efficiency solutions makes it possible for an elderly widow to make ends meet, a single mother to buy groceries, or a young paralegal to pay their mortgage,” said Derrick Blue, interim CEO of the Tampa Hillsborough Action Plan in Tampa Bay, Florida.

In separate releases, Advanced Energy Economy points to more than 160,000 advanced energy jobs in Florida—more than real estate, and double the work force in department stores—despite the notorious decision by governor and U.S. senate candidate Rick Scott to ban references to climate change and global warming in state publications. In Texas, advanced energy employs 233,000 people, more than the combined work force in mining, oil, and gas, and double the number in auto dealerships.

“Those “top 50 metros” account for 38% of all the clean energy jobs across the country—reinforcing E2’s point that this work force is both concentrated and widespread.”

Typo. The actual figure reported by the survey is 58%.
https://www.e2.org/cleanjobscities/