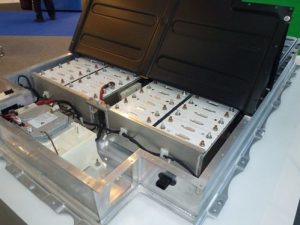 A new design for a rechargeable zinc-air battery could bring down the cost of energy storage and reduce reliance on some of the rare minerals now used to manufacture lithium-ion cells.

Compared to a cost of US$300 to $400 per kilowatt-hour for lithium-ion, “NantEnergy says the technology costs less than $100 per kilowatt-hour, a figure that some in the energy industry have cited as low enough to transform the electric grid into a round-the-clock carbon-free system,” the Times states. And the system is simple: “plastic components and shell casing, a circuit board and zinc oxide, all in a package the size of a briefcase. In charging the batteries, electricity from solar installations is stored by converting zinc oxide to zinc and oxygen. In the discharge process, the system produces energy by oxidizing the zinc with air.”

NantEnergy developed the technology with support from the World Bank, and the International Finance Corporation was one of its early investors. The batteries have already been deployed in solar microgrids in 110 villages across nine countries in Asia and Africa, “including places that otherwise relied on generators or even lacked electricity,” the Times states.

During Climate Week, the World Bank announced a $1-billion battery deployment program for developing countries, with the hope of triggering another $4 billion in investment.

NantEnergy has already installed batteries on more than 1,000 communications towers in the U.S., Latin America, and Southeast Asia, including a Duke Energy site in North Carolina that withstood Hurricanes Florence and Irma, and “says it expects to expand the use of its product in telecommunications towers and eventually extend it to home energy storage, beginning in California and New York,” the paper adds. “Beyond that, it anticipates use in electric cars, buses, trains, and scooters.” The company holds more than 100 patents related to the battery, and foresees an eventual market worth $50 billion.

In North Carolina, Duke Energy senior engineer Sherif Abdelrazek “said that because the zinc air battery does not pose fire hazards as lithium-ion batteries can, it does not need external cooling systems to prevent overheating,” the Times states. “The system’s success means the Duke tower no longer needs to be connected to the electric grid,” so that “13 acres of land in the Great Smoky Mountains that was used for power lines is being turned over to the National Park Service.”

And that system was installed was before NantEnergy announced it had reached the $100/kWh price point. The company says the units can run 72 hours on a single charge, enough to withstand a hurricane like Florence.

The announcement is of obvious interest in California, where legislators have just set a 2045 deadline to hit a 100% renewable electricity target. “California is obviously in need of that kind of breakthrough to meet our goals,” said California Solar and Storage Association Executive Director Bernadette Del Chiaro. “I cannot claim to be in absolute certainty that this is everything they say it is, but it’s exciting. It’s this kind of breakthrough that we expect from our innovators.”