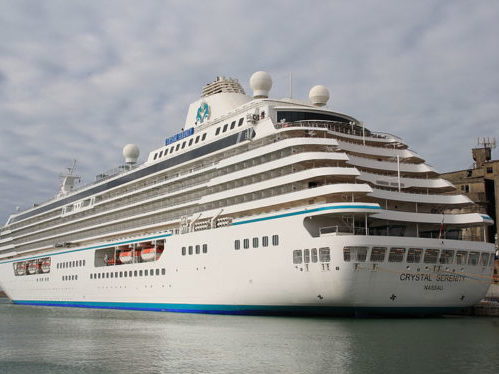 With a mid-sized cruise ship emitting as much particulate pollution as a million cars, environmental organizations in Germany and Canada are urging vacationers to think twice before booking holidays with an industry whose green performance seems to fall far short of its mystique.

In its latest annual report on cruise ship pollution, Germany’s Nabu looked at dozens of vessels operating in Europe, and couldn’t come up with a positive recommendation for any of them.

“We found out that pollution from the cruise ship industry is still massive, even despite that they claim newer vessels are clean and green,” Head of Transport Dietmar Oeligar told CBC’s As It Happens current affairs show. “All of them run on the dirtiest fuel you can imagine. It’s heavy fuel oil, it’s quite toxic. It’s a residual of the petrol industry, and it contains a lot of dirty stuff.”

Oeligar added that, unlike cars and trucks, most cruise ships lack a catalyst or particulate filter to control their airborne pollution.

“The cruise companies know what they are doing. And they know about the problems that result from their emissions,” he said. “But still, they order new ships and don’t install emission abatement systems on their ships. Most of the newest ships, that cost about a billion dollars, they don’t even have an emission abatement system that would cost about a million. I would say this is really irresponsible.”

Noting that cruise ships’ use of heavy fuel oil is accelerating the loss of Arctic sea ice, Stand.earth’s cleanupcarnival campaign is looking for signatures on a letter to Carnival Corporation CEO Arnold Donald, calling on the company to switch its fleet to lower-carbon diesel, install particulate filters on all its ships, and lead the introduction of clean shipping technologies.

“While Carnival publicizes its environmental initiatives and values, as CEO you have not committed to ending the use of one of the world’s dirtiest fossil fuels,” Stand writes. “We applaud efforts to reduce dangerous sulphur dioxide emissions in ways that do not contribute to greater water pollution, but these will never be a replacement for ending the use of [heavy fuel oil] in the Arctic. Rather than being a part of the problem, it’s time for Carnival to lead the way and adopt clean shipping solutions!”

Oeligar stopped short of recommending that everyone avoid a cruise vacation if it’s the once-in-a-lifetime trip they’ve been saving for. But he said travelers might want to be careful about inhaling while they’re on board. While cruise operators refused to allow Nabu to take measurements on their ships, the organization did help three European news agencies collect data. The results “showed that the amount of emissions that passengers breathe on board is more than 20 times higher than on a main road with a lot of pollution,” he told As It Happens host Carol Off.

Meanwhile, a cruise ship arriving at the Port of Vancouver last weekend gave onlookers a gruesome snapshot of the industry’s potential impact when it arrived with a dead whale lodged in its bow.

“The 16-metre fin whale was wedged between the bow and the hull of the Princess Cruise Lines’ Sapphire Princess when it docked at the Canada Place terminal,” CTV News reports. “Fins are the second largest marine mammal after blue whales. Typically, the species is extremely rare in local B.C. waters, and [the whale] likely would have been struck off the coast of northern B.C.”

Craig Delahunt of Tymac Launch Service told CTV that whale spearings are very rare, adding that he’d seen three of them in 20 years on the job. The last one was reported 10 years ago.

“Basically, it’s like a train coming through. It just hits them,” Delahunt said. “That bow is like a spear. Once they’re hit, it usually breaks their back, killing them almost instantly.”