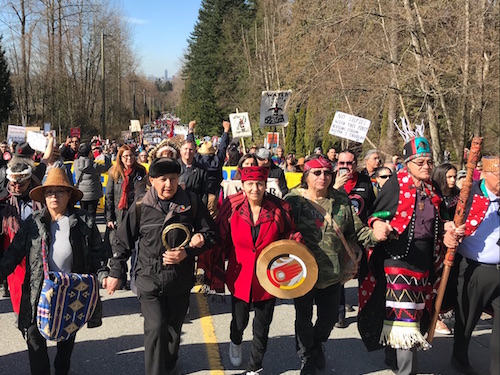 Pipeline fighters are gearing up for another round and questioning just how much meaningful engagement the Trudeau government expects to deliver, following Natural Resources Minister Amarjeet Sohi’s announcement Friday giving the National Energy Board 22 weeks to redo part of its assessment of the C$13.8-billion Trans Mountain pipeline expansion.

The NEB said it was confident it could meet the February 22, 2019 deadline.

The review will focus on the project’s implications for marine tanker traffic and the resulting impacts on the endangered southern resident killer whales. The government said it would announce a separate process for achieving “meaningful consultation” with First Nations, including many of the project’s most implacable opponents.

Pipeline opponents, many of them involved in last month’s Federal Court of Appeal ruling that halted construction on the project, were less than impressed with the announcement.  Observers immediately assumed the 22-week deadline was driven by the timing of next year’s Alberta and federal elections.

“The Tsleil-Waututh [First Nation] welcomed the federal government’s recognition of its position that marine shipping should have been included in the NEB’s assessment, but warned that additional review and two-way dialogue on these issues will take more than 22 weeks,” the Vancouver Sun reports. “Any plan for additional review must be developed in collaboration with the Nation,” the Tsleil-Waututh said in a written statement. “Tsleil-Waututh looks forward to immediate engagement on the nature and scope of the new National Energy Board review of marine shipping.”

“Our Nation would like to know what scientific process they used to determine this time frame. Is this a process based on political expediency again?” said Squamish Nation councillor and spokesperson Khelsilem.

The Union of B.C. Indian Chiefs urged Ottawa to accept defeat on the intensely controversial pipeline and withdraw its latest instruction to the NEB. “Mr. Trudeau, enough is enough,” said UBCIC President Stewart Phillip. “The Trudeau government’s fanatical determination to build this disastrous pipeline and tanker project is boorish and disheartening,” he added.

“We are looking forward to seeing the details, but any further review process must comprehensively address the risks that our government, and many British Columbians, have been raising,” added B.C. Environment Minister George Heyman.

Sohi wouldn’t comment on whether the timing of the NEB review was keyed to the Alberta election early next year, National Observer reports.

“What we are focused on at this time is to make sure we are taking the right steps, that we are living up to the highest standards when it comes to protection of the environment, and consulting with Indigenous peoples,” Sohi said.

“We will not comment on what the decision of the NEB is going to be,” he added. “That is something the NEB will decide after listening to the presentation from various stakeholders. The NEB is an independent party that makes decisions on its own, based on the evidence that is presented to them.”

But environmental groups said the time Ottawa allowed for the reconsideration would be insufficient to generate new insights on the project, and questioned whether it’s real consultation when the government knows what conclusion it wants to reach.

“I wait to hear how the NEB will get that new evidence,” said Living Oceans Executive Director Karen Wristen, noting that it would take longer than 22 weeks to hire experts and assess strategies for mitigating the project’s impacts on the southern resident whales.

“A 155-day review announced by the federal government today is unlikely to tell us anything new,” agreed Ecojustice lawyer Dyna Tuytel. “Furthermore, today’s announcement failed to mention how the government plans to mitigate any of the project’s effects, including noise and oil spills.”

“It’s not true consultation or science if you’ve decided on the answer before asking the question,” said Greenpeace Canada Senior Energy Strategist Keith Stewart, adding that Ottawa is still treating environmental assessment and Indigenous consultation as “a box-checking exercise”.

The federal government also came under immediate pressure from Alberta Premier Rachel Notley, who said her province “will not tolerate legal game-playing” if the consultation extends beyond 22 weeks. “And should it start to appear that game playing is working, we will hold Ottawa’s feet to the fire.”

Much of the coverage following Sohi’s announcement seemed to be preparing the ground for a new federal process that still won’t satisfied First Nations opposed to the project.

Shortly after the announcement, a CBC interviewer asked newly-minted Fisheries Minister Jonathan Wilkinson (L, North Vancouver) how the government expects to consult about a project on which it has already declared its determination to proceed. “Any consultation needs to be meaningful. We need to listen to what the concerns are. We need to consider whether we can actually accommodate those concerns,” Wilkinson replied. “If we cannot accommodate those concerns, we need to provide an appropriate rationale as to why they cannot be accommodated, and that is something that we intend to do as we move forward.”

Ultimately, he added in another interview Saturday, consultation is about satisfying the requirements laid down by the court, not meeting every Indigenous community’s expectations. “It certainly doesn’t necessarily mean they get everything they want,” he told CBC Radio’s The House.

All of which has National Observer’s Emilee Gilpin asking how the government has missed the mark so totally on its duty consult with First Peoples. “How did a government so adamant that this pipeline proposal was a matter of ‘national interest’ that it bought the project outright, fail to meet its constitutional obligations?” she asks, in a long post built on interviews with an environmental assessment expert, three lawyers, and an Indigenous land defender. “How did a government, publicly so eager to reconcile with Indigenous nations and fix the flaws of past governments, fail to succeed where its predecessor did not?”