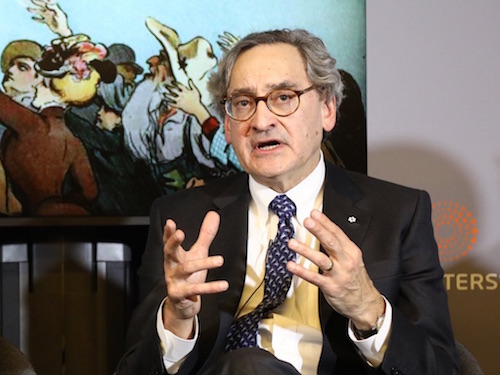 Major institutional investors must begin looking at the new climate economy as “what you start doing,” rather than a constraint on their activities or the financial returns they bring their clients, said Michael Sabia, president of the C$300-billion Caisse de dépôt et placement du Québec, in opening remarks to a group of foreign government representatives and private sector leaders during G7 meetings in Halifax last week.

“Climate change is real; it’s gone beyond the point of being a risk,” Sabia said. “We see its impact every day—heat waves and drought in Europe this summer, record temperatures, 33°C north of the Arctic circle in Finland. And “in North America, pretty extreme weather events, deadly hurricanes, floods, wildfires.”

Yet “too many investors, even long-term oriented investors today, still see climate change as a constraint—something that forces them to make a choice, to compromise their returns, and therefore runs counter to their fiduciary obligations to their clients,” he added. “As long-term investors, collectively, we need to think differently, because addressing climate change is not only about what you stop doing—more importantly, it’s about what you start doing.”

Sabia pointed to the trillions of dollars in economic gains to be had in the post-carbon transition. He said the Caisse “has noticed that consumer attitudes and buying patterns are now changing,” National Observer reports.

Sabia “told delegates that a pool of $46 trillion in long-term investments handled by pension funds should move more quickly to clean energy, low-energy buildings, and low-carbon transport systems,” The Canadian Press adds. “He cited his pension fund’s investments in solar and wind energy, along with low-energy real estate projects,” as examples of opportunities for low-carbon growth.

“Climate change is becoming a popular issue, a people’s issue. We see this frequently — we see it in the companies we invest in,” said Sabia, son of early feminist icon and Progressive Conservative candidate Laura Sabia. “How? Because their growing concern is to ensure that their brands are seen by the public to be on the right side of this defining issue.”

He added that emissions have begun to drop in sectors as varied as real estate, agriculture, transportation, and electronics, “but frankly, not enough.”

The meeting was closed to media except for opening remarks. Afterwards, Canada’s ambassador to the United Nations, Marc-André Blanchard, said participants talked about “infrastructure in a very wide sense.”

“We discussed the necessity to build resilient infrastructure, low-carbon infrastructure, the fact that there are many opportunities in renewable energy,” he told National Observer.