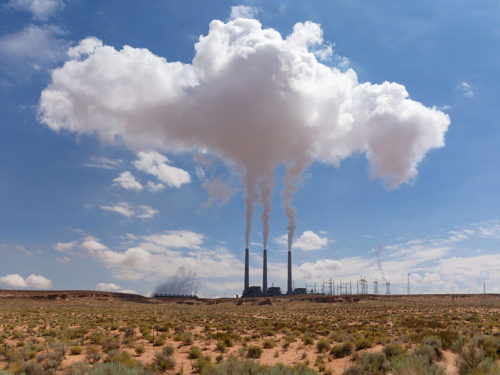 The biggest U.S. coal plant west of the Mississippi River and the mining company that supplies it, Peabody Energy, are facing renewed jeopardy after a potential investor pulled out of a deal to buy the Navajo Generating Station in Page, Arizona. And the news report from Bloomberg Environment suggests state decarbonization efforts may have been one factor driving the decision.

“Unfortunately, recent developments in California and Arizona will create additional challenges for baseload power plants, and it has not been possible to secure from counterparties commitments to purchase a sufficient amount of power generated from the 2,250-megawatt Navajo Generating Station to enable a workable operating paradigm,” wrote Todd Fogarty, spokesperson for Middle River Power LLC, in an email to Bloomberg.

So Middle River and global investment firm Avenue Capital Group “have concluded that the steps required to facilitate our ownership and operation of the plant are no longer possible within the required time frame, and therefore we are terminating our efforts,” he added.

While Fogarty didn’t specify which “recent developments” the company had in mind, “California Governor Jerry Brown (D) signed a bill September 10 mandating that all the state’s electricity come from carbon-free sources by 2045,” Bloomberg notes. “A renewable energy measure also will be on the Arizona ballot in November.”

But “Middle River’s bid to buy Navajo Generating Station was always fraught with difficulty,” the news agency states. “The plant’s biggest customer, the Central Arizona Project, said it would stop buying Navajo power at the end of 2019 in favour of cheaper alternative sources.”

Moreover, “any new buyer also would have to complete a grueling, multi-year environmental assessment under the National Environmental Policy Act. The current environmental impact statement expires at the same time the lease does, in December 2019.”

Bloomberg says Navajo has become a “freighted political symbol,” reflecting the collision between the Trump administration’s full-throated support of a dying U.S. coal industry and the reality that renewable energy and natural gas are both now undercutting coal on price. “One of Interior’s top priorities has been to roll up our sleeves with diverse stakeholders in search of an economic path forward to extend NGS and Kayenta Mine operations after 2019,” Interior Secretary Ryan Zinke said last June.

Peabody’s Kayenta Mine has been the plant’s sole supplier, and Kemal Williamson, president of the company’s America’s division, issued a call for “multiple stakeholder groups and, particularly, the U.S. government, to take all necessary steps to ensure ongoing operation of the Navajo Generating Station and Kayenta Mine beyond 2019.”

In May, Rep. Paul Gozar (R-AZ) floated a law to require the Central Arizona Project “to continue buying Navajo power until the plant’s $1.1-billion debt is paid off,” Bloomberg recalls. “That is expected to take decades. The bill was never introduced.” (This week, six of Gozar’s siblings and close relatives endorsed his opponent in congressional elections that are now just 42 days away. Not that anyone at The Energy Mix has a countdown app on their phone.)

The Navajo plant’s increasingly dire future is just one face of the U.S. coal industry’s collapse, in spite of Donald Trump’s oft-repeated campaign promises and subsequent regulatory rollback aimed at propping up the industry. In mid-September, the Herald Bulletin in Anderson, Indiana reported that coal plants mothballed in response to federal regulations enacted under President Barack Obama won’t likely be brought back online.

“It’s impossible to get these units restarted,” explained Logansport Municipal Utilities Superintendent Paul Hartman. “If you leave a coal-fired plant down for three or four or five months or through a winter, it’s not going to start back up again.”