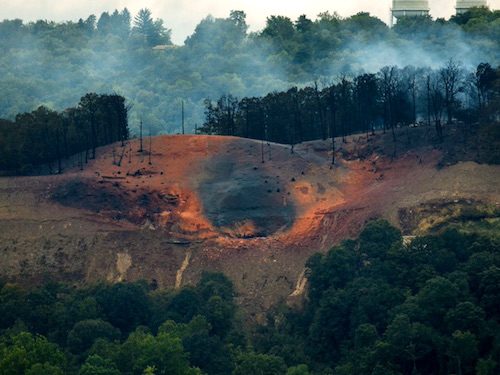 A natural gas pipeline that exploded outside Pittsburgh earlier this month, just a week after it went into service, is part of a multi-billion-dollar push to connect the northeastern U.S. fracking industry with expanded plastics and petrochemical manufacturing in the region.

“By providing a path for the liquids and gas to flow to market, the Revolution gathering line would facilitate the drilling and fracking of roughly 500 Marcellus and Devonian wells in just one Pennsylvania County, Butler County, officials from the company building the cryogenic plant said in 2015, when the deal was announced.”

But ETP’s construction plan has fallen behind schedule, and three years after that initial announcement, drillers are pressing the builder to pick up the pace. “If it is delayed to later in the year, that certainly has some costs to it,” said Glen C. Warren, CEO of Antero Resources, referring to the US$2.5-billion Mariner East project, one of the three pipelines in ETP’s plan.

“All three pipelines have been plagued by construction problems,” DeSmog states, and “Energy Transfer Partners has faced strong pressure to finish the project from shale drillers, who aim to sell ethane for a higher price than it commands when it’s left mixed in with methane.”

Earlier this year, DeSmog reported on China’s role in financing an $83.7-billion petrochemical hub straddling Pennsylvania, Ohio, West Virginia, and Kentucky. But even Chad Riley, CEO of oil, gas, and pipeline service company The Thrasher Group, sees a challenge in the industry’s plans for the region.

“I think the magnitude of some of these projects that we’re talking about here is hard for a lot of us and a lot of our communities to wrap their head around,” he told a conference in Pittsburgh over the summer.

Others are raising serious questions about the connection between plastics production and fracked gas.

“If all of this production capacity is constructed, it may lock in a massive expansion of cheap plastic production for decades,” the U.S. Center for International Environmental Law reported last year “With expanded plastics production and consumption will come more spills and emissions from chemical plants, more plastic clogging shorelines and killing marine life, and more micro-plastic particles—and the pollutants they may absorb finding their way into food chains and tap water.”

“These kinds of pipelines shouldn’t be so close to our schools, residential neighborhoods & community centers,” tweeted Pennsylvania State Senator Andy Dinniman. “Mariner East should be permanently halted until we get real assurance that they’re being installed, inspected, and operated with safety as the top priority.”

DeSmog is also out with a report on the industry’s growing emphasis on “produced water”, a term for the toxic water left behind over the operating life of a fracking well. In a conference presentation in August, Rice University’s Gabriel Collins suggested a business case for setting up a water processing company dedicated to serving the fracking industry, suggesting that investors don’t appreciate the risk water poses to fracking in Texas’ Permian Basin.

Financiers “aren’t as well apprised of some of the other risks and challenges that could be just as material, if not more so,” Collins told Bloomberg. “I’d put water right at the top of that list.”

DeSmog cites a Duke University study that shows water demand from fracked wells growing 770% between 2011 and 2016, while “the amount of toxic wastewater produced in that same time period rose 1,440%.”