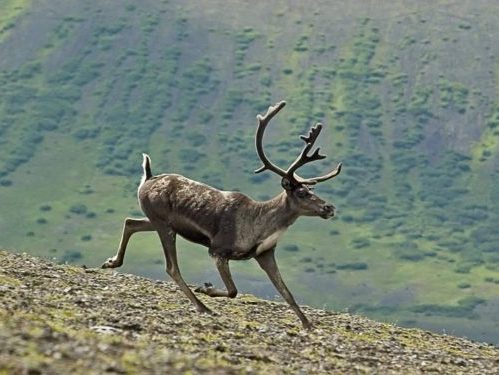 Wildlife scientists are expressing “profound” concern about a government discussion paper that was supposed to chart a course to a woodland caribou recovery plan for British Columbia, but instead relies on strategies that have failed in the past—and says nothing about the fossil extraction and mining activities that bear the greatest responsibility for habitat loss.

The plan has implications beyond wildlife conservation because caribou are an indicator species for the health of the forest, and forest carbon sinks are a crucial cornerstone of the effort to get global greenhouse gas emissions under control.

Last November, caribou specialists like Justina Ray, senior scientist and president of Wildlife Conservation Society Canada, were encouraged when the new B.C. government was compelled under the federal Species At Risk Act (SARA) to develop a plan to protect critical caribou habitat in the province’s mountain forests. Then the provincial government made the “surprising announcement that it will develop a ‘new’, ‘made in B.C.’ program to save caribou, even though recovery strategies already exist to save the antlered mammal engraved on the Canadian quarter,” The Narwhal reports.

“We fear that intentions to develop a ‘made in B.C.’ approach will amount to much wasted time, even as decisions are under way to degrade more prime caribou habitat,” Ray and University of Northern B.C. ecology professor Chris Johnson wrote in June, in a six-page letter to the provincial ministry of forests, lands, natural resource operations and rural development. A recent discussion paper released by Minister Doug Donaldson adds “little if anything” to the recovery effort, they added, and incorporates approaches that have failed to help the caribou in the past.

The Narwhal notes that 30 of B.C.’s 54 caribou herds are at risk of local extinction, and 14 have fewer than 25 animals, a “crisis situation” that Johnson said leaves little time for discussion.

Ray and Johnson wrote off the plan put forward in the government discussion paper as a “vague set of initiatives that aspire to be something ‘new,’ but in fact look similar if not identical to the status quo that ignores legally mandated and scientifically supported recovery actions.” The paper “spells out a direction that is more appropriately characterized as status quo than ‘new’ and ignores key tenets of clear and consistent scientific findings regarding caribou declines that suggest strongly that a ‘made in B.C.’ approach is both unreasonable and unnecessary,” the two scientists add.

The discussion paper, and the subsequent conversation it has generated, suggest B.C. is leaning toward a “triage” approach to species protection that has become a controversy in itself in recent news coverage.

“The discussion paper alludes to prioritizing recovery by herd, suggesting that recovering all of B.C.’s caribou herds may not be in the cards as far as the province is concerned,” The Narwhal notes. “But a triage approach would likely contravene current federal recovery strategies, Ray and Johnson told the ministry, calling for more transparency on the government’s objectives and strategies.”

“Triage may be part of that mix, but please state so clearly and with the intent of a real dialogue, and with clear criteria that avoid a situation whereby extirpation [local extinction] of herds is inadvertently incentivized,” they wrote.

A B.C. spokesperson said the ministry hasn’t given up on any herd. But “unfortunately, there may come a time when hard decisions on supporting failing herds may have to be made.”

Ray and Johnson added that the “caribou-friendly approaches” in Donaldson’s discussion paper “will appeal to industry, but these shortcuts will not be effective without limiting the extent of habitat change across landscapes.” The Narwhal, citing the two scientists, notes that “oil and gas activities—the dominant cause for land use change for boreal caribou herds and some mountain caribou herds—and mining are not even mentioned in the habitat management section of the paper, which fingers forestry and recreation as the major culprits for habitat loss.”

“We’re at a place now where we’ve got to stop talking about accommodating everyone and start doing things for caribou, because they’re just disappearing,” Johnson said. “Those days of managing for everything on these landscapes are behind us, at least relative to caribou conservation.”