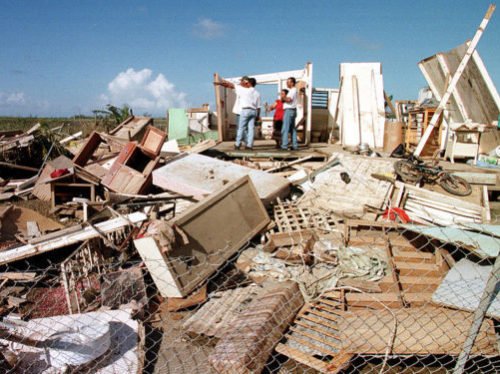 A year after Hurricane Maria killed nearly 3,000 people and destroyed much of the infrastructure on the island of Puerto Rico, the country is facing a major mental health crisis, as the grinding, day-to-day reality of living with the aftermath of a US$139-billion catastrophe steadily overwhelms the survivors.

While Donald Trump continues to deny the impact of the storm, recently tweeting that Maria killed “anywhere from 6 to 18” people, there’s no way to spin the reality on the ground. The storm robbed survivors “of basic necessities and electricity, and in many cases their homes and possessions,” CBC News reports. “Some areas had no power for up to nine months, the grid is still spotty, and remnants of Maria’s devastation and the ongoing repairs—or lack of them—can still be seen right across the island.”

The CBC story includes a photo of storm debris still lying in piles on the island, a year after the hurricane struck.

With a new hurricane season now in full swing, “the hidden toll on the state of mind of Puerto Ricans is also a significant concern,” CBC notes.

Suicide rates increased more than 29% last year, “and they remain high as people struggle to get their lives back on track,” writes correspondent Jennifer Barr. “The anguish of the people who lost their loved ones and their homes to Maria is still very much alive. Added to this is the stress and confusion around complicated U.S. Federal Emergency Management Agency (FEMA) funding applications that are snarled in bureaucracy, home repairs that still need to be done, jobs that have disappeared, families that have been separated, and daily routines that remain badly disrupted even a year after the storm.”

“The Puerto Rican people are very proud people, and even if we are going through hard times, we will smile and say everything’s OK,” added Jerry Kirkland, director of emergency management for the municipality of Naguabo, on the eastern coast of the island. “But we’re not.”

Naguabo community activist Tayna Fernandez, one of several residents interviewed for the CBC story, summed up much of the local experience. A year after the hurricane, “her roof is still in need of repair and she is clearly exhausted,” Barr writes.

“FEMA didn’t help me in anything, anything. Even though I have a cement roof when it rains, it just starts pouring inside because FEMA didn’t help me to put a treatment on my roof,” Fernandez said. So “who’s helping me? My family. We don’t have everything we need, but at least we have what we need right now in the moment. Next week I’ll worry about next week…”