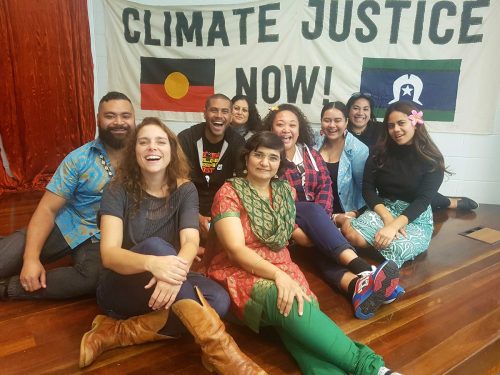 Four years after blockading the world’s largest coal port in Newcastle, Australia with their traditional canoes, the Pacific Climate Warriors have managed to shift their region’s relationship with the climate crisis “from passive victims to active leaders,” the Transition Network reports, based on an interview with Samoan climate organizer Fenton Lutunatabua.

Two years after the blockade, and two months before COP 21 in Paris, the Warriors organized a three-day vigil at the Vatican, where they “prayed together for their climate leaders and traditionally mourned what they are losing to climate change,” the Network recalls. But the change in narrative wasn’t something the warriors actively sought out. “It was actually an existing movement of Pacific Islanders and our Elders who were really angry with how the development world framed Pacific Islanders,” Lutunatabua recalled. Elders were already focused on the need for the region to tell its own stories, “so we just contextualized that to climate change.”

At the time, “the stories that were told about Pacific Islanders in the climate discourse were that we were looking for handouts, the whole victim narrative,” he said. But with the encouragement of Koreti Tiumalu, an organizer of the Vatican vigil who died suddenly in 2017, the narrative shifted to community resilience, and the warriors’ own determination to stand up for their homes and their people.

“It’s about reframing vulnerability as a strength,” Lutunatabua stressed. “One of the things we do quite intentionally with the warriors is to encourage them to share their stories about what compels them to do this work. So if you’re going to go out to communities, wanting to talk about their trauma—model that for them, show them how you’re dealing with your trauma of climate impacts, but how you’re also persevering in the face of that trauma.”

It may not be an easy message to deliver or receive, but “if people don’t connect or understand why you are doing this, it won’t work.”