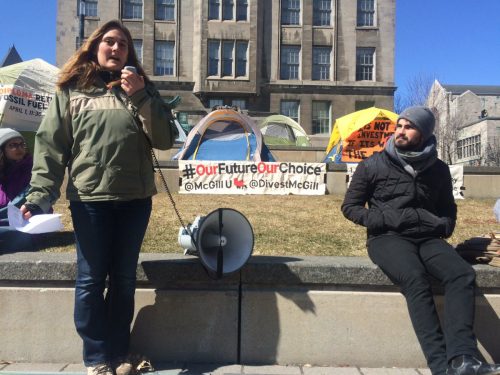 The McGill University senate has voted in favour of dropping the institution’s fossil fuel investments, a decision that puts it at odds with a 2016 board of governors decision to hold onto its oil and gas stocks.

“What this decision showed is really how out of touch the board’s decision was, in terms of where the McGill community stands on this issue,” said Divest McGill organizer Jed Lenetsky. “It goes to show the difference in decision-making that can occur when people are voting not only in terms of their own beliefs, but also on behalf of a community which they represent.”

“Though only the board of governors has the authority to dictate whether or not the university divests from fossil fuels, the Senate’s approval of this motion establishes their stance on the issue,” reports The Bull & Bear, a campus magazine produced by McGill’s Management Undergraduate Society. The vote “places them alongside [the Student Society of McGill University], [the Post-Graduate Students’ Society], and the McGill Association of University Teachers in their support of divestment from fossil fuels.”

The Bull & Bear traces the history of the university’s fight over divestment, after local organizers submitted their initial request in 2015. A subsequent report from a social responsibility committee appointed by the board of governors “stated that investments in fossil fuel companies did not cause social injury, as claimed by Divest McGill,” the magazine recalls. “The Committee concluded that the benefits of investment far outweigh the costs,” and the Board of Governors endorsed the report.

When the issue re-emerged last week, senior university officials were quick to argue that investment and divestment decisions fell outside the senate’s academic mandate. “This is a matter that is outside the authority and confidence of senate,” said Provost Christopher Manfredi. “Institutional overreach by one governance body can invite institutional overreach by other governance bodies.”

But Faculty of Arts Senator Gregory Mikkelson pursued the motion anyway. “He cited McGill’s pledge to become carbon neutral by 2040, as well as examples of other universities that have divested from fossil fuels, and campus groups that have endorsed the motion,” The Bull & Bear states.

The motion also gained support from veteran journalist Martin Patriquin, who argued in an early September opinion piece that “in ceasing to profit from fossil fuels, McGill would be far more credible in its commitment to a carbon-neutral future.”

“Like many high-minded institutions catering to a mostly progressive clientele, the school has a host of programs designed to educate on the threat of climate change. The university itself has also made the laudable pledge to be carbon neutral—albeit 22 years from now,” Patriquin wrote.

But even though the university endowment fund’s 29 fossil investments represent a “relatively small percentage of the more than 650 equities” it holds, “the list includes some of the country’s biggest energy companies, including nine coal firms and eight that mine or pipe bitumen from Alberta’s oilsands,” Patriquin noted, citing Mikkelson’s research. “The school has nearly C$7 million invested in Suncor Energy. It’s the endowment’s third-biggest Canadian equity investment.”

While Mikkelsen was expecting precisely the pushback he received on his senate motion, “McGill has divested itself from holdings for moral and political reasons at least three times in recent history,” Patriquin wrote. “The first, the school’s divestment of its holdings in apartheid-era South Africa in 1985, was perhaps the most audacious, given how the global anti-apartheid movement had yet to peak. Not coincidentally, worldwide fossil fuel divestment campaigns have since adopted an ethos similar to that of their anti-apartheid predecessors: highlight the negative effects of their continued use.”