No Result
View All Result
FEATURED
BREAKING: 40% of Fossil Fuels Now Under Development Must Stay in the Ground May 17, 2022
Rocky Mountain Glaciers ‘Past Tipping Point’, with Some Expected to Vanish by 2030 May 17, 2022
UK Activists Block Russian Oil Tanker From Docking in Essex May 17, 2022
EXCLUSIVE: Bid to Revive Doomed Nova Scotia LNG Project Collides with Germany’s Net-Zero Plans May 16, 2022
3,800 Residents Ordered to Evacuate after Flooding in Hay River, NWT May 16, 2022
Next
Prev
Home Demand & Distribution Cities & Communities 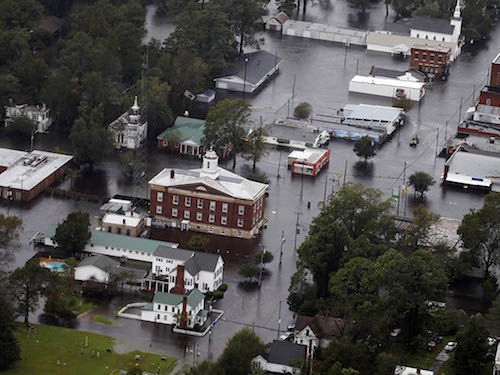 Meteorologists may have downgraded it from a hurricane to a mere tropical storm, but the “storm known as Florence is creating a slow-motion natural disaster for the Carolinas,” as rivers and streams overflow their banks and the waters continue to rise, the Washington Post reports.

By Monday morning, the storm’s confirmed death toll had reached 17. The 117,000 residents of coastal Wilmington are cut off from the world, with no access by land, sea, or air and most people without power. The Post says North and South Carolina have essentially become an archipelago, with communities “cut off and turned into virtual islands Sunday as floodwaters blocked roads, ports remained closed, and officials warily monitored damaged utility systems and 3,300 ‘hog ponds’ loaded with manure. The rivers continue to rise, with some unlikely to crest for several more days.”

And notwithstanding the Post’s description of a “natural” disaster, some researchers are already attributing its ferocious impact to climate change. “Climate change is actually happening now. It’s here,” said Kevin Reed of Stony Brook University’s School of Marine and Atmospheric Sciences, discussing a paper that forecasts 50% more rain in a storm like Florence. “The climate has warmed, and it’s impacting events that are occurring.”

While climate scientists like Penn State’s Michael Mann and NASA’s Gavin Schmidt were less than convinced by Reed’s approach to attribution, there’s wider support for his emphasis on flooding as the most significant impact of slower-moving storms. “Though Florence did not arrive with winds as violent as once feared, forecasters got the storm surge and rainfall correct,” the Post states. “They have made clear that this event is all about the water—which the storm has delivered in devastating quantity.

Florence hit Wilmington, NC Friday morning as a Category 1 hurricane, dropping nearly 20 inches (50 centimetres) of rain along the Atlantic coast. Later that day, the storm was “projected to migrate at barely more than a walking pace across northern South Carolina, passing close to the city of Florence—truly—on Saturday,” according to the Post. “The great danger now, experts say, is river flooding, and then, once the remnants of the tempest reach the higher terrain of the southern Appalachians, flash floods, mudslides, and debris flows.”

The U.S. National Weather Service warned that flooding would likely last weeks, producing “a perilous moment for the hundreds of thousands of people who took to the roads to escape the storm’s fury” at a moment when most rivers were still several days from cresting. With the region already saturated by summer rains, the Weather Service expected more than a dozen major rivers in the Carolinas and southern Virginia to flood, with several of them setting records.

On Friday afternoon, the storm was moving at just three to five miles per hour. The Post says scores of people had to be rescued from their homes in New Bern, NC, where the downtown was “literally underwater”. Utility Duke Energy predicted one to three million power outages and warned it could take weeks to restore full power.

“The storm is wreaking havoc on our state, and we’re deeply concerned for farms, for businesses, for schools, and even for whole communities that might be wiped away,” said North Carolina Governor Roy Cooper (D). South Carolina had never before seen “a hurricane staying on top of us for this long,” said Governor Henry McMaster (R).

“There’s nothing to steer it. It’s all about the steering currents. We don’t have any right now,” said U.S. National Hurricane Center Director Ken Graham. “It’s like a bubble with no wind, it just floats. You don’t want slow, but that’s what we have.”

Eventually, the storm will hit the mountains of western North Carolina. “It’s like running into a wall, and that moisture has to go somewhere,” explained Hurricane Center meteorologist Joel Cline. “It goes up, creates rain, and you have torrential rain in that area.”

Over the weekend, the New York Times said rainfall in North Carolina had already broken a state record, 12 deaths were confirmed, and local, state, and federal officials were “rushing to rescue people stranded in half-submerged homes across the region”. The Post warned the storm was “far from done” and predicted record-setting rains and catastrophic flooding.

As the storm progressed, The New Yorker revealed that South Carolina had elected not to evacuate several prisons in the flood zone, leaving thousands of inmates out of McMaster’s declaration that the state was “not going to gamble with the lives of the people of South Carolina. Not a one.” The inmates were locked in their cells and were not permitted bottles or buckets for extra water, which the state corrections department deemed contraband. “The people of SC who you’re responsible for include those who are incarcerated, Gov. McMaster,” the American Civil Liberties Union tweeted. “You can’t leave them in harm’s way.”

The Return to Now blog reported that North Carolina hog farmers were “scrambling to drain thousands of toxic manure lagoons, some the size of lakes, before they overflow into drinking water and the growing ‘dead zone’” off the coast.” As the biggest turkey producer, the second-biggest pork producer, and the third-largest chicken producer in the U.S., “North Carolina’s factory farms produce more than 10 billion pounds—or 15,000 Olympic swimming pools’ worth—of wet animal waste per year,” the blog noted.

“We have 62 hog farms that still remain in our 100-year flood plain, along the Neuse River, which are always at risk of flooding anytime a major storm comes through,” said Neuse Riverkeeper Katy Langly. While technologies can somewhat reduce the volume of pollution from factory farms, the true solution is to “move back toward sustainable agriculture,” she added.

And while front-line responders tried to cope with a growing, slow-moving disaster, the Washington Post reported that FEMA Administrator Brock Long, a well-respected emergency management professional, might soon be removed from his post over a spat with Homeland Security Secretary Kirstjen Nielsen.

“The prospect of Long’s dismissal has alarmed current and former staff at FEMA and DHS, and it has captured the attention of officials on Capitol Hill, who note that the agency’s No. 2 position has been vacant for nearly two years and that Trump’s current nominee, Peter Gaynor, still awaits Senate confirmation,” the paper noted.

“FEMA’s third in command, Daniel Kaniewski, could take over, at least on an interim basis, if Long were to leave. But his background in policy and academia—and his lack of hands-on emergency management experience—has generated concern that an internal shake-up would unsettle the agency at the worst possible time.” 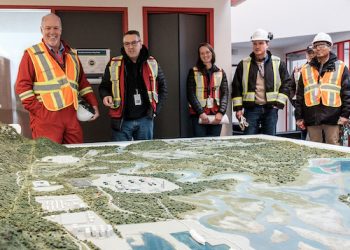