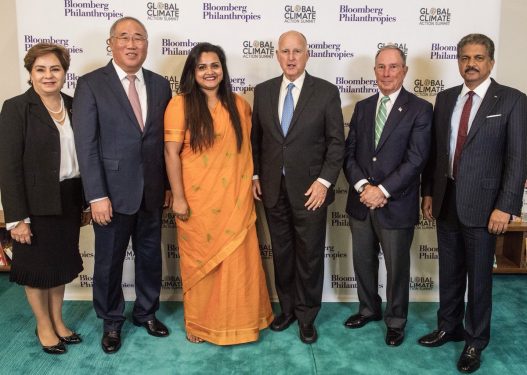 After three days of new low-carbon commitments from regional governments, cities, and industry, the Global Climate Action Summit concluded Friday with a call for governments to step up their climate ambition, and renewed pressure on California Governor Jerry Brown to suspend new fossil fuel permits and protect front-line communities in the state that hosted the landmark international event.

The summit urged governments to do what it takes to ensure that global greenhouse gas emissions peak in 2020, then “fall sharply thereafter to avoid the worst impacts of climate change.”

“We, the people gathered at the Global Climate Action Summit, and communities around the world calling for climate action, commit to a climate-safe future for all,” the summit’s closing declaration stated. “Now is the time for all leaders to step up and take bold action. Climate change is a threat to all humanity, and it can only be solved by a global cooperative effort. Only together will we transform our communities and energy systems, create employment opportunities and economic prosperity, protect our oceans and natural environment, and complete the transition to a zero-carbon world.”

The declaration said it was summit participants’ goal to “give national leaders the confidence and assurance needed to increase their ambition and accelerate climate action by 2020 for the security of our planet, now and for generations to come.” It urged countries to step up their climate commitments under the Paris Agreement, develop their own mid-century decarbonization targets, and empower bottom-up action on climate change.

To achieve the last of those three goals, it said national governments must “support and accelerate climate action at the local and regional level, with legislation, regulation, financing, and policies that incentivize zero-carbon development, and through inclusive, transparent planning, dialogues, and consultations that empower businesses, cities, states, investors, civil society, and individuals.”

One of those announcements came from a group of 392 large, institutional investors responsible for more than $30 trillion in assets, pledging to support climate action to meet the objectives of the Paris Agreement. “Investors including the BBC Pensions Trust, Transport for London pensions fund, Aviva, the Environment Agency pension fund, Legal and General, and the Joseph Rowntree Charitable Trust are calling on the companies in their portfolios to reduce their carbon footprint, support clean energy, and strengthen climate-related financial disclosures,” The Independent reports.

“It remains to be seen whether that constellation of commitments from cities and companies, none of which are legally binding, turns out to be just a wish list,” the Washington Post adds. But former U.S. vice president and Climate Reality Project founder Al Gore said he was impressed by what he saw.

“I’ve been to a lot of gatherings and conferences related to the climate crisis for many years now, and this is really top-notch,” he told the Post. “The nature of the commitments being announced is extremely heartening.”

At the end of the summit, Brown doubled down on an earlier threat that California would start its own satellite program to track atmospheric carbon pollution if the Trump administration followed through on its plans to dismantle NASA’s monitoring systems.

“We’re under attack by a lot of people, including Donald Trump, but the climate threat still keeps growing,” Brown said. “We want to know what the hell’s going on, all over the world, all the time. So we’re going to launch our own satellite, our own damn satellite, to figure out where the pollution is and how are we going to end it.”

In 2017, after Brown first raised that possibility, The Nearly Now published a story datelined January 27, 2025 to mark the eventual launch of the state’s first geostationary satellite. The faux news dispatch reported that the satellite, named Moonbeam as an homage to Brown, would soon begin sending back “a constant stream of climatology, seismology, and emergency services support data,” placing California in a “very exclusive club” of governments that own satellites.

“If there was one obvious takeaway from this unprecedented gathering of leaders from local, state, and foreign governments as well as the private sector, it was that they are not going to let Washington impede their plans,” the Los Angeles Times observed, in response to Brown’s closing announcement. “The attendees made clear they intend to carry the world toward meeting the goals of the Paris Agreement on climate change,” despite Donald Trump’s disavowing it, “even if it means states must launch their own space programs.”

Alongside the declarations and deal-making at the summit, climate and activists spent a lot of time outside San Francisco’s Moscone Convention Center, demanding that Brown match up his own state’s record as a major oil and gas producer with his commitment on climate change. “You need keep-it-in-the-ground commitments,” Greenpeace International Executive Director Jennifer Morgan told the Post. “People don’t know how big oil and gas development is in California.”

“This is his moment,” Greenpeace USA Executive Director Annie Leonard said of Brown. “The entire world is watching him. So we’re still hoping he will step up. He cares about climate, but I have to conclude he doesn’t actually care about the communities that are bearing the brunt of these impacts, or he would do something.”

After environmental protesters interrupted a speech by former New York mayor Michael Bloomberg, shouting that “our air is not for sale”, Bloomberg responded that “only in America could you have environmentalists protesting an environmental conference.” And the Post cast the front-line mobilization during the summit as a clash between progressive and centrist wings of the U.S. Democratic Party.

But the positioning from climate hawks leading up to the summit has been unrelated to partisan politics. They’ve pointed out that California is the second-largest fossil-producing state in the U.S., and with a term-limited, 80-year-old Brown unlikely ever to seek elected office again, he’s free to take a bold, positive step without worrying about the reaction from fossil industry donors.